Even The Carolina Panthers Wildly Disrespected Baker Mayfield Before Acquiring Him 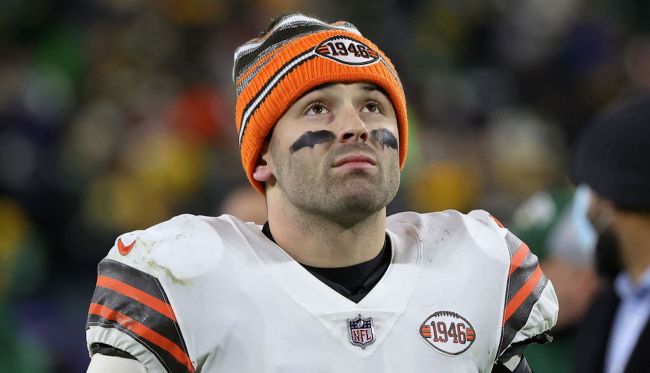 If he wasn’t a multi-millionaire professional football player who is married to a beautiful woman, part of me would actually feel quite sorry for Baker Mayfield, who has been thoroughly and utterly disrespected by the spineless Cleveland Browns organization throughout the entirety of the offseason.

After leading the franchise to their first playoff win since the early 90s, Mayfield spent a majority of the 2021 season injured, resulting in what was perhaps his poorest season as a pro yet.

Nevertheless, the Browns became convinced that Mayfield was no longer the answer and decided to bring in embattled QB Deshaun Watson, who has been accused of sexual misconduct by 24 women. Not only that, but they handed the controversial signal-caller a fully-guaranteed 5-year, $230 million contract.

Then, to top it off, they shipped Mayfield off to the Carolina Panthers for a box of scraps while also agreeing to pay $10.5 million of his salary next season. Just complete disrespect through and through.

Unfortunately for Baker, though, the Browns aren’t the only NFL team throwing shade his way, as the Carolina Panthers — the franchise that *just acquired* him — initially wanted him to take a $7 MILLION pay cut, according to reports.

According to The Athletic, the two teams agreed on draft compensation over the course of May and early June — Carolina would send Cleveland a conditional fifth-round pick that would become a fourth-round pick should Mayfield play 70 percent of the Panthers’ offensive snaps.

But Mayfield’s pay continued to be a sticking point. According to the report, the Panthers initially wanted Mayfield to take a pay cut of more than $7 million. But Mayfield was willing to give up only $3.5 million of his $18.86 million guaranteed salary.

With Mayfield now on the roster, the Carolina Panthers now have two of the top three picks in the 2018 NFL Draft, as former Jets quarterback Sam Darnold is also on the roster.

RELATED: Unlike 20 Of His 24 Accusers, NFL Not Reportedly Prepared To Settle With Deshaun Watson