Unlike 20 Of His 24 Accusers, NFL Not Reportedly Prepared To Settle With Deshaun Watson 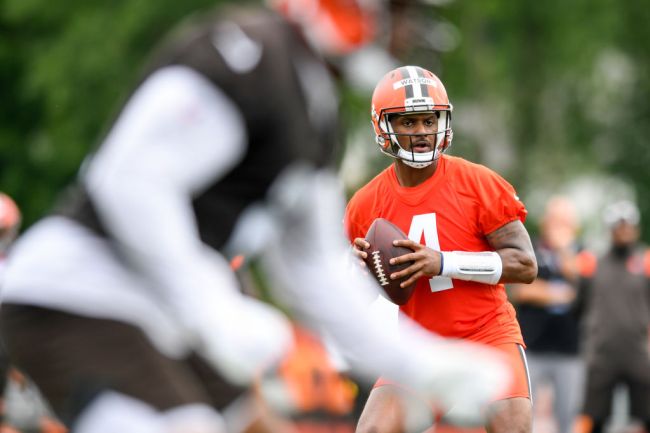 As the Deshaun Watson saga continues to drag out, further reports seem to indicate just how severely the league is looking to punish the embattled QB.

According to various NFL sources, including ESPN’s Dan Graziano, the two sides are not currently talking about a settlement at this time. Graziano says the league is still looking to hit Watson with an indefinite suspension of at least one year.

Watson, however, is not prepared to settle for such an arrangement, despite the league suggesting he can apply for reinstatement after just 12 games.

“They weren’t able to come close enough late last week,” ESPN reporter Dan Graziano said. “The league is still insisting from what I’ve been told on an indefinite suspension that would allow Watson to . . . apply for reinstatement after a certain period of time. Initially they wanted that period to be a year but they moved a little closer to Watson and were talking about, ‘You know, you can reapply after 12 games,’ for example. But Watson is still not interested in signing up for that indefinite suspension.”

As one source with knowledge of the dynamics pegged the potential for a settlement along the lines that Graziano discussed, “We are far past that point”. [via Pro Football Talk]

Not only did the Cleveland Browns trade for Watson this offseason but they signed the 26-year-old signal-caller to a fully-guaranteed five-year, $230 million deal. They then shipped out former #1 overall draft pick Baker Mayfield, who delivered the franchise their first playoff win since 1994, to the Carolina Panthers. They’re also on the hook for paying the former Oklahoma Sooner $10.5 million next season.

RELATED: The Browns Are Paying Baker Mayfield A Pretty Penny To Play AGAINST Them Next Season