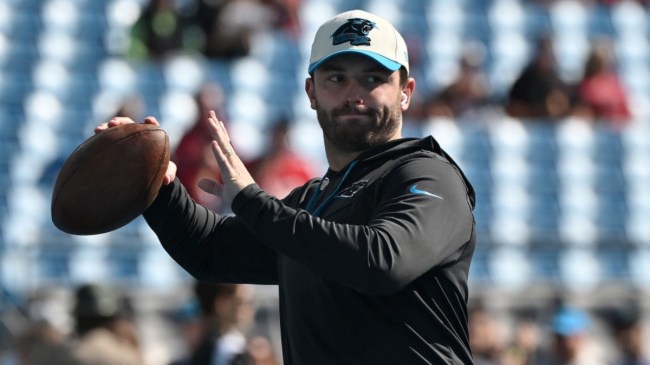 It’s only Week 8 of the NFL season and Baker Mayfield’s time as the starting quarterback may already be over.

The Baker experiment hasn’t gone anywhere near according to plan for the Panthers. Baker started the Panthers’ first 5 games of the year and wasn’t the improvement they expected at the position.

In his 5 starts, the offense continued to struggle, averaging 17 points per game and never scoring more than 24 points in any of his starts.The Panthers went 1-4 in his starts.

In his 5th start, Baker was injured, opening the door for PJ Walker, who wasn’t even expected to have a roster spot at the end of the preseason, to take over as the starter.

He had a rough first start against the Los Angeles Rams where he only threw for 60 yards, but the Panthers stuck with him for another start. Walker threw for a pair of touchdowns against the Tampa Bay Buccaneers in his second start and it appears that impressed the Panthers enough for him to remain their starter.

Today it was revealed that Baker Mayfield took most of the scout team reps for the Panthers at practice and should be available for Sunday’s matchup against the Falcons, but Walker will be the starter.

Baker Mayfield is ready to play for the Carolina Panthers, but they’re starting PJ Walker anyway

Steve Wilks said Baker Mayfield took most of the scout-team reps and should be available Sun. vs. ATL.
But P.J. Walker took all the first-team reps.

This is not a good sign for Baker Mayfield’s future with the Panthers or really his future in the league. This makes it seem pretty unlikely that he’ll be winning his starting job back any time soon, which also means he’s probably not a part of the Panthers’ plans for the future.

That leads to a very difficult question about his future. If he couldn’t hold on to the starting job for the Carolina Panthers, where exactly could he hope to be a starter again?

The Panthers once looked like a lifeline for Baker as he searched for a place to be a starter again this offseason, but now it seems that his move to Carolina may have just been delaying the end of his time as an NFL starter.