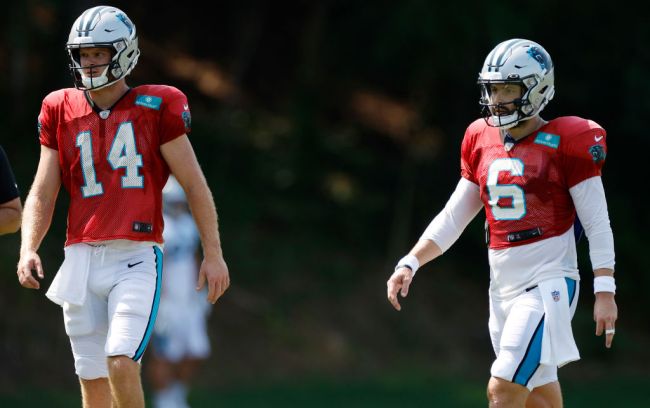 There are a few teams around the NFL who actually have fans wondering what the outcome of their quarterback competitions in training camp will be. The Carolina Panthers aren’t one of those teams.

From the moment the Panthers traded for Baker Mayfield, fans have all assumed that he would be the team’s starting quarterback for the 2022 season. However, the Panthers have not been ready to admit that throughout the offseason.

Today, they released their first depth chart of the year and it had Baker and Darnold both listed as the team’s 1st-team QB.

Despite all reports indicating that there is absolutely no reason to believe this job belongs to anybody other than Baker Mayfield, the Panthers are sticking with their story.

After a bit of a rocky start to camp, Baker has separated himself from Darnold recently.

That separation probably wasn’t particularly necessary for Baker based on Darnold’s history with the Panthers. There was nothing about his performance as their starter that led anybody to believe he should continue to serve as the team’s starting quarterback.

Despite that, it seems he will continue on in a ceremonial quarterback competition over the next couple of weeks as the Panthers give him until after the preseason game against the Patriots to compete with Baker for the starting spot.

Perhaps more interestingly, that same depth chart listed Matt Corral as the team’s QB4, behind PJ Walker, who might not even be on the roster to start the season. For Corral, there could actually be a competition brewing as he tries to give the Panthers faith in the idea that he’s their future.

All of this will begin to sort itself out for the Panthers during Saturday’s matchup against the Washington Commanders.