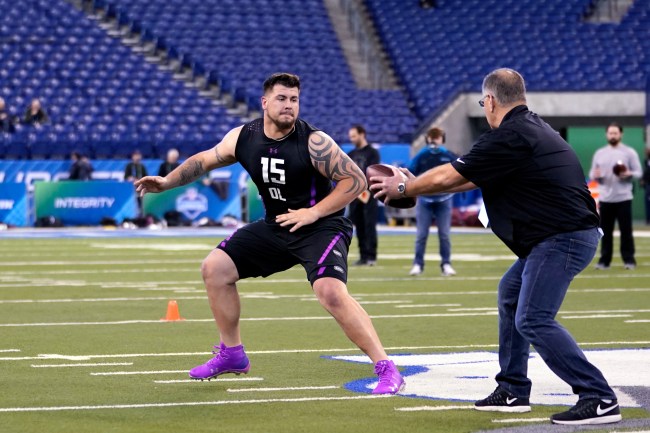 Carolina Panthers offensive lineman Taylor Hearn was involved in a street fight over the weekend in a Augusta, Georgia and unfortunately for Hearn it looks like he took a massive L.

Early this morning TMZ release the video of Hearn’s street fight and the Panthers lineman got knocked out after getting into it with another man.

Clearly, the massive Hearn thought he’d be able to bully these guys around, due to his giant size and NFL strength, but he learned very quickly he was wrong. After some verbal insults and tussling, one of the guys on the street cracked Hearn with a straight right to the face that dropped the lineman like a sack of potatoes.

Hearn eventually gets up and appears to be okay … even starting to fight again. Witnesses tell TMZ Sports cops arrived at the scene a short time later … but Hearn was not arrested. In fact, we’re told no one was arrested.

Hearn got immediately mocked by Twitter after losing the fight.

I swear I never seen an OL with hands. They fight like they block lol Taylor Hearn also should be ashamed of himself. Drunk as a skunk fighting in public smh. Expect a phone call from Dabo after you get cut 😩 https://t.co/dQmbSRO5zz

LOL this guy got KO"d by a dude half his size, no wonder their offensive line sucks! #taylorhearn

Statement from the Panthers on a video recently released by TMZ involving OL Taylor Hearn: “We are aware of the video, and have been in contact with Taylor and the league about the incident. We will have no further comment at this time.”