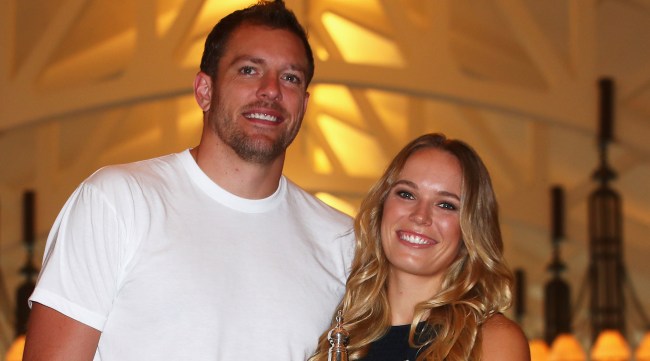 Tennis star Caroline Wozniacki and ex-NBA player David Lee finally got married this past weekend after being engaged for close to two years.

Wozniacki, the former number one-ranked female tennis player in the world, was previously engaged to PGA Tour star Rory McIlroy until he broke off the engagement in 2014 with a phone call after wedding invitations had already been sent out.

The 28-year-old Wozniacki and 36-year-old Lee were married on Saturday at the Castiglion del Bosco Hotel in Italy – the same place Kate Upton and Justin Verlander were married in 2017.

“I had just won Singapore, the last event of the year, and we went to Bora Bora on vacation, and he said that he didn’t know when he was going to propose, but that he had the ring, and it’s burning in my bag, it’s burning in my pocket so I need to do it,” Wozniacki told Vogue. “He set up this sunset cruise with a dinner on a private island, and on the cruise, there was this guy with a small guitar playing music and all of a sudden, I saw David panic, and he goes to his backpack and starts searching for something, and I said: ‘What’s happening?!’ and he’s like ‘Oh nothing!’ Then, he grabs the box with the ring and he goes down on one knee, and he proposes. Whatever he said I don’t remember—I was kind of in shock. When I panic, I start laughing, and I wasn’t expecting it so I started laughing and said, ‘Of course, yes.’ And he was like, ’Is that a yes?’ And I was like: ‘Yes!’ It was right at sunset, and it was beautiful!”

Serena Williams served as one of Wozniacki’s bridesmaids, while NBA players Pau Gasol and Harrison Barnes, former NFL player Jesse Palmer, and tennis player Angelique Kerber were also among the 120 guests in attendance in Tuscany.

“Best weekend of my life,” Wozniacki wrote on social media.

We sort of knew this day was coming soon, we just didn’t know when, as Wozniacki and her friends celebrated her upcoming nuptials at a bachelorette party back in April.

So, who is going to have the most world dominating kids? Wozniacki and Lee? Or Chris Pratt and Kathernine Schwarzenegger?