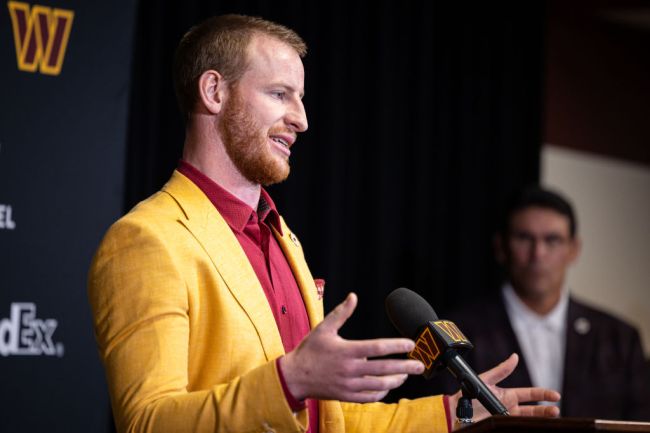 After the Indianapolis Colts missed the playoffs as a result of their Week 18 loss to the Jacksonville Jaguars, it didn’t take long for the organization to throw Carson Wentz under the bus. In fact, they haven’t done much other than blame Carson Wentz for their shortcomings in the months since their season ended.

Even after they traded Wentz to the Washington Commanders, owner Jim Irsay continued to take shots at him, going so far as calling their acquisition of Wentz in the first place a mistake.

Despite all of the shots being taken at Wentz, we surprisingly hadn’t heard anything from Wentz on the subject since the season ended. Today that changed as he finally responded to the Colts’ criticism in an interview with Colin Cowherd.

Here’s what Wentz had to say to Cowherd on the subject:

“I mean, it is what it is. Everyone is entitled to their own opinion. I thought last year was a really fun year. I thought we did some incredible things, but we came up short at the end – obviously. I struggled down the stretch there and timing was poor. I didn’t expect that. I didn’t expect things to unfold the way they did. I thought things were in a pretty good place there. I had awesome relationships with every single person in that building. I can’t say enough good things about the people over there. It kinda came out of left field. He’s entitled to his own opinion and he’s entitled to do what he wants with his football team.”

It seems like Wentz is ready to move on rather than bicker with the front office of his previous team about who is to blame for the team’s failures last season. If he can go out and perform with the Commanders next season, it will go a long toward shaking the narrative that the Colts have been building about him.