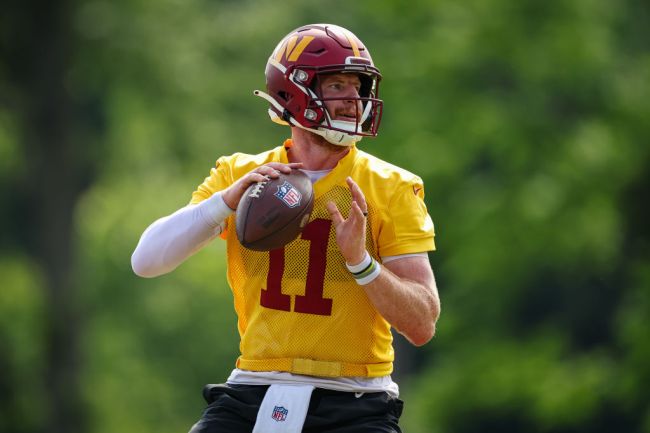 Carson Wentz has a lot riding on his 2022 season. After being replaced by the Philadelphia Eagles with Jalen Hurts, Wentz went to the Indianapolis Colts and wasn’t quite able to turn his career around.

He struggled through parts of the season and received just about all of the blame for the team missing the playoffs after a bad Week 17 loss to the Jacksonville Jaguars.

Then he got one last lifeline to keep his career alive when the Washington Commanders traded for him this offseason.

That chance to turn his career around hadn’t gotten off to the best start, with major concerns about his accuracy once again being raised from the start of camp.

Today, the reports seemed to begin turning around. Those in attendance gave positive reports on how today’s practice went for Wentz and Commanders coach Ron Rivera believes that Wentz is getting more comfortable with his pass catchers.

"Wentz is getting more comfortable, he's developing more rapport with the receivers and the tight ends and the backs." pic.twitter.com/AINPrTiTgr

He’s getting more and more comfortable. He’s developing a little bit more of a rapport with the receivers, and the tight ends, and the backs. And I think, again, we were in a padded practice where the offensive line can defend themselves for the most part as opposed to some of the shell practices that people observed. So I just thought it was a well-timed-out practice. I thought the timing between him and the receivers is getting better, and I think that’s important.

Wentz badly needed to start having some good days for the Commanders. If he’s going to have a chance of being a starting quarterback beyond this season, he may have to play well enough to get the Commanders to the playoffs. Otherwise, the Commanders will likely be looking for a quarterback in the 2023 draft.

For now, it seems like he is at least starting to turn things around and there could be some hope that he’ll be able to improve the Commanders’ offense in 2022.