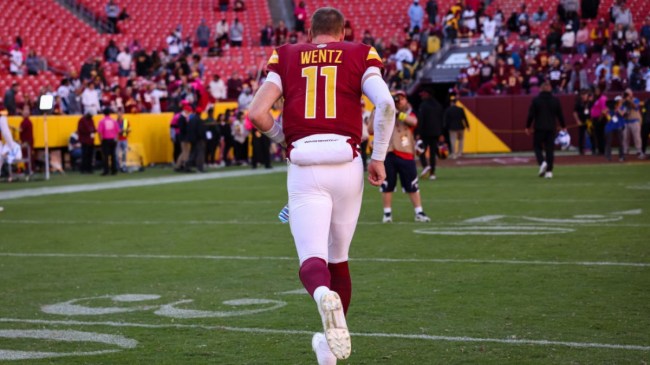 Through the first 5 weeks of the NFL season, Carson Wentz is seeing another fresh start not quite pan out like he had hoped.

In his first season with the Washington Commanders, Wentz managed to lead the team to a win in Week 1, but the season has gone downhill since. In Week 2, they went to Detroit and lost to the Lions, who haven’t won since.

Then Wentz got a shot at a revenge game and scored just 8 points in a loss to the Philadelphia Eagles.

Things didn’t get any better the following week as the offense only produced 10 points in a Week 4 loss to the Cowboys.

Week 5 it seems the situation finally boiled over. After falling short against the Titans, Commanders head coach Ron Rivera was quick to place the blame on Wentz.

"Why do you think the teams in the division are farther ahead at this point?"

Today, Wentz responded to those comments from his head coach.

Coach addressed it and handled it. Nothing for me that I’m overly concerned about. Coach is a very straightforward, upfront guy and he addressed it in the team meeting- which I thought was very cool- and what he meant by it all. So, I feel very confident in him.

Wentz hasn’t been great for the Commanders this season, but it’s kind of difficult to see how you can pin the blame on Wentz in this one. He threw for 359 yards and a pair of touchdowns in the game with only 1 interception and even though he fumbled 3 times, the Commanders didn’t lose any of them.

Meanwhile, he got no help from the team’s run game, with Antonio Gibson and Brian Robinson Jr rushing for just 28 yards on 12 combined carries.

Wentz hasn’t been the solution to the Commanders’ offensive issues they were hoping for when they brought him in, but he also certainly hasn’t the team’s only problem.