Twitter Had A Field Day And Ripped The Redskins After They Traded For Another Mediocre QB, Case Keenum 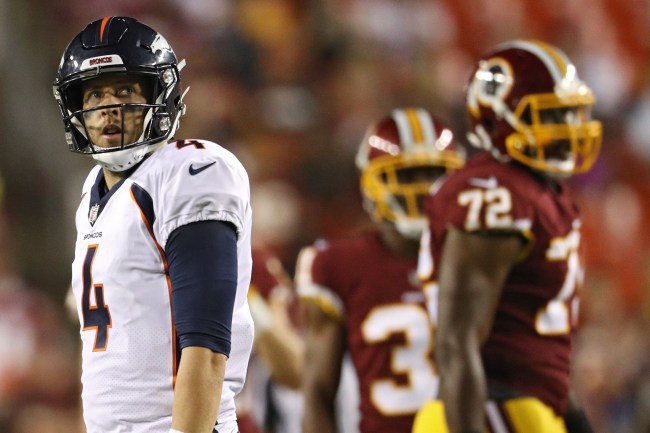 Case Keenum isn’t a terrible NFL quarterback, but is he the type of player that one would want his or her favorite team to trade for in hopes of turning the franchise around? Well, not exactly. Just ask the Denver Broncos how that went last season, as John Elway tossed $25 million in guarantees at Keenum during the 2018 offseason following his breakout 2017 campaign that saw the signal-caller lead the Minnesota Vikings to the NFC Championship Game. The return on investment? 18 touchdowns, 15 interceptions from Case Keenum and a lousy 6-10 record as the Broncos starter.

Apparently, though, that was good enough for the Washington Redskins, because the dysfunctional franchise agreed on terms to acquire Case Keenum today, which will become official next week once the NFL’s new league year begins March 13. The Redskins haven’t developed a quarterback in, oh, forever, yet they decided that Keenum was worth a late-round draft pick for, while agreeing to pay half of his 2019 salary, which comes out to being $3.5 million.

Seeing as how the Redskins now have Case Keenum competing against Colt McCoy for the starting gig — due to questions about any possible return to the hobbled Alex Smith following his brutal leg injury — people on Twitter were less than impressed with the team’s decision to make the trade to acquire Keenum. Just take a look at some of what Twitter was saying below.

Selling Case Keenum to Redskins fans would be like if my wife left me tomorrow (possible) and I announced to every girl in Clarendon that I was single via an email blast from a yahoo address.

The #Redskins love being on that treadmill of mediocrity, huh? Not really sure how Case Keenum makes them any better next season or is an “upgrade” to Colt McCoy 🤷🏼‍♂️

There can be only one winner.

That winner will not be the Washington Redskins.

Jay Gruden: Hey, I think we should trade for Josh Rosen

Dan Snyder: I think we should go for Case Keenum instead

Oh man, sign me up for a 2019 season where at QB, the Eagles have a healthy Carson Wentz and the rest of the NFC East has:

The @Redskins make me want to drink. I have NO idea what there doing. I've been a fan since the 80's and I'm completely in the dark. SMH. A life of a football fan.

Optimistic Redskins Fans: wow, we might be able to get Rosen for a 3rd round pick, and continue to add playmakers on offense and defense through the draft.

You really can’t blame the people for voicing their (very angry and/or frustrated) opinions, can you? Trading for Case Keenum to have him compete with Colt McCoy is like trading in a used, 1999 Dodge Stratus in exchange for a used, 2000 Ford Taurus; like, what’s the point?

Maybe Keenum bounces back and somehow proves he’s a Pro Bowler (doubtful), or maybe the Redskins really have no clue how to run an NFL franchise (probable).