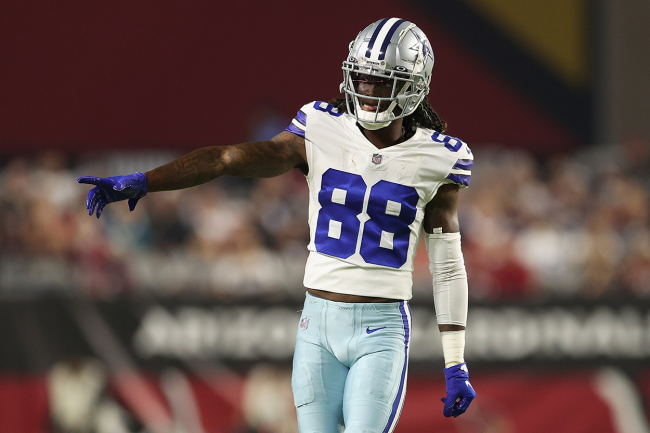 Cowboys wide receiver CeeDee Lamb is being sued by a Dallas-based trading card company for allegedly breaching his contract. It could cost him up to six-figures.

New case filing in #TheHobby! Looks like Leaf followed through on its earlier statements that it would bring a lawsuit against a to-be-named athlete who had not signed Leaf cards.

Leaf Trading Cards, a Dallas-based company, filed a lawsuit against Lamb on May 20 claiming that he “breached the parties’ License Agreement by failing and refusing to sign all trading cards which he agreed to sign.” As a result, the company claims that his failure to sign the cards caused “significant damage to Leaf, including loss of income and goodwill with customers who purchased redemption cards with the expectation” that they would include his signature.

Leaf CEO Brian Gray has since tweeted about the suit and said that he does not want to do this, but that he has to because the customers need defending.

Gray says that is the company’s first-ever lawsuit of its kind. It is also believed to be the first time that a trading card company has filed a lawsuit against a player for not providing autographs after agreeing to do so in a contract.

As we shared last week, Leaf has filed the first ever lawsuit against an athlete in order to compel the completion of an autograph contract so customers holding redemptions are not forced to take replacements.
We hate doing this, but customers need defending here.

This is not a get rich quick scheme. Leaf is suing Lamb for $100,000 or less— for reparations and attorneys’ fees. In addition, the company has requested in the suit that the court serve Lamb either at the Cowboys’ offices in Frisco, Texas or at his home.

It does appear that Lamb signed some stickers and cards for Leaf prior to the 2020 NFL Draft. Some of the cards are for sale on eBay. However, Leaf’s lawsuit indicates that they had a deal with Lamb for more cards to be signed.

More details and conversation surrounding the lawsuit can be found HERE.