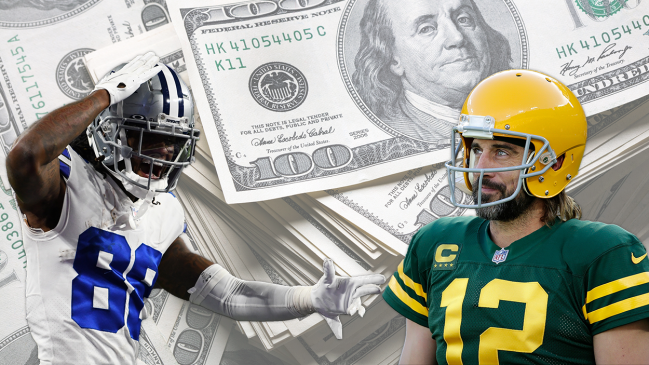 When it comes to fines, the NFL’s policies are completely subjective. We know this.

However, the rules are the rules. That doesn’t mean they have to make sense.

As for the most recent round of fines, there is quite a bit of confusion and frustration. Especially for Cowboys wide receiver CeeDee Lamb.

Lamb, a second-year player out of Oklahoma, has been fined $46,865 this season alone. He has received two fines, totaling $20,600, for having his jersey untucked, one $5,150 fine for having socks that failed to cover his lower leg, as well as fines for taunting and an illegal crackback block.

Meanwhile, Aaron Rodgers and Allen Lazard, who directly violated COVID-19 health and safety protocols, were each fined only $14,650. NFL fans could not believe the disparity.

While Lamb’s teammate Amari Cooper has given his wide receiver counterpart a hard time about his frequent fines, he does not find it as funny— especially after learning that Rodgers was fined less for violating health protocols than he was for uniform violations.

In response to the difference in fines, Lamb is very confused. He spoke with ESPN and shared his thoughts.

Here is what Lamb had to say:

“Annoy me? Nah. Confuse me a lot? Very much so yes,” Lamb said. “I just don’t understand why I’m always the one getting fined for some reason. Untucked jersey. I don’t know.”

Lamb also said that he is not wearing his jersey any differently than he did as a rookie and that he was not fined then.

“Like, I don’t know what I need to do honestly,” Lamb said. “I just know for sure I’m more conscious of it. … Post-tackle or anything, I guess I got to look down, pull my jersey down. Stuff like that. It’s weird. It’s very weird, considering the next time I get caught with my jersey untucked, I heard I get fined like $50,000 or something. That’s weird.”

Going forward, Lamb is not going to let this keep happening. He will speak with the uniform inspector before games.

“Long story short, I’m going to make sure every game now that I’m fine before the game,” Lamb said.