Anthony Lynn Reveals That The Chargers ‘Absolutely’ Looked Into Signing Cam Newton, But Chose Not To Due To Crowded QB Room 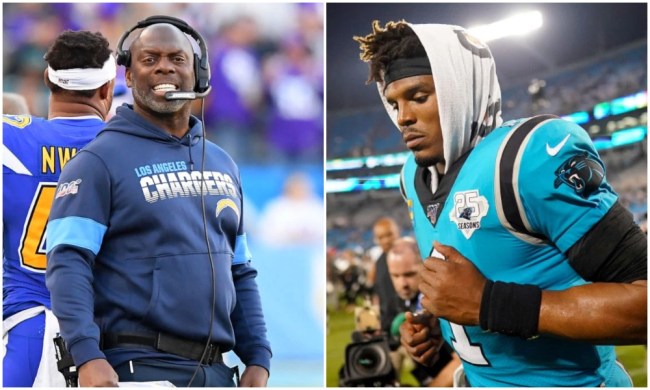 When the Chargers elected to move on from Philip Rivers this offseason most people assumed that the franchise would go after a free-agent quarterback on the market despite the fact that they held the sixth-overall pick in the 2020 NFL Draft. It was just assumed that Cam Newton was on Los Angeles’ list of targets because it made so much sense, but we’re almost in June, and Newton is still looking for a job.

Los Angeles is very high on Tyrod Taylor and drafted Justin Herbert with the No. 6 pick in the draft, so signing Newton doesn’t make much sense now, but that doesn’t mean that the team didn’t take a serious look into signing the former league MVP earlier in the offseason.

“Absolutely, Cam is a tremendous quarterback,” Lynn said. “He’s been MVP of this league, he’s led his team to the Super Bowl and he’s healthy now from what I hear. Cam is going to be on somebody’s roster and he’s going to help somebody win a few games, but yeah, we did take a look at that, sure.”

As for why the team elected not to sign Newton, Lynn voiced just how confident he is in the quarterback room he already has with Taylor and Herbert.

“I feel really good about the quarterback room that I have,” said Lynn. “With Tyrod Taylor, Easton Stick — those are guys that a lot of people don’t talk about, but he was a Division I AA — he won like three national championships. He’s a hell of a leader, hell of a professional and I think he has a bright future in this league one day.”

Newton has battled the injury bug over the past few seasons which is a glaring concern, but he’s still only 30-years-old, has thrown for nearly 30,000 yards and 182 touchdowns throughout his career and has played in a Super Bowl.

Newton is very cleary in a unique situation, however, because he’s too good to be a team’s backup but the injury concerns make it hard for teams to pull the trigger on signing him to at least compete for a starting job. He won’t be unemployed for long, a team will eventually sign him, but they may just wait until the sports world starts returning to ‘normal.’