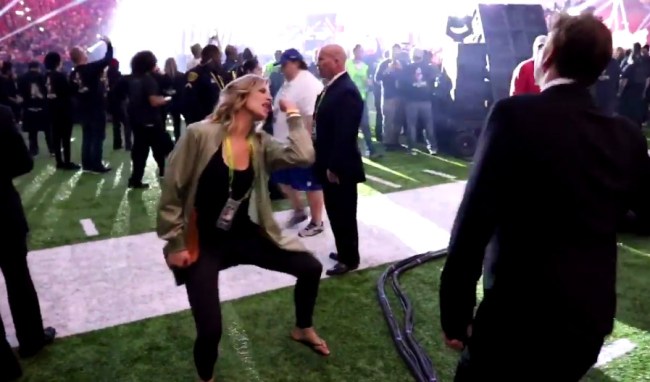 Fox Sports 1’s Charissa Thompson is just flat-out great. Not only does she (a) know football and (b) look drop-dead gorgeous, she also seems like she really isn’t afraid to enjoy just how freaking good she has it right now.

Not many people in her position would be so willing to share so much of the real them in public forums like social media and well, in front of thousands at places like Super Bowl LI.

Which is EXACTLY what she did while Lady Gaga was performing at halftime (after not really jumping from the roof).

Check out Thompson ABSOLUTELY dancing liking no one was watching with Peter Schrager alongside. Not that you’ll even really notice him, because Charissa is just full-on killing it.

Better than anything we'll see on the #GRAMMYs tonight.@CharissaT & @PSchrags own this @ladygaga performance. pic.twitter.com/jgw6jwYRe3

This is a woman I would literally pay money to be able to just hang out and party with for one night.

Dear Diary, I am sorry but not sorry. I was sober despite what it looks like and I just hope @PSchrags knows the depth of my gratitude https://t.co/KdhWhjwp3e