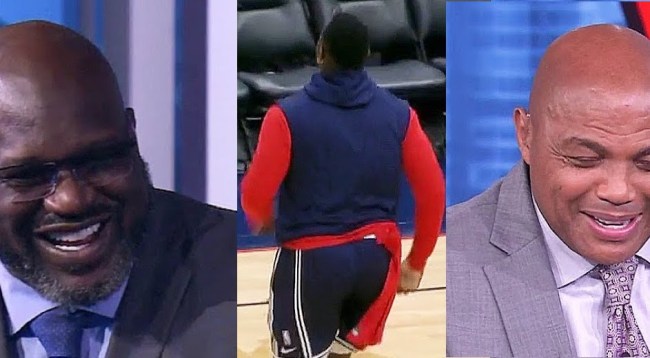 Despite having yet to suit up this season as he recovers from surgery on a broken foot, New Orleans Pelicans star Zion Williamson found himself as the center of attention on Wednesday night’s episode of Inside The NBA.

While the 2021-22 NBA season only started a few weeks ago, its famed jokester hosts, Charles Barkley and Shaquille O’Neal, are clearly already in midseason form as the pair clowned on Williamson, particularly as it relates to his weight. To make matters worse, Chuck said that Williamson — who reportedly ballooned to “north of 300 pounds” in the offseason — looks like what would happen if he and Shaq had a baby. A disturbing image to be sure, but also, weirdly, an accurate analysis of Zion’s current stature. This is, in a nutshell, what makes Inside The NBA the best pregame/postgame show in American sports.

Despite how it may sound on its surface, the pair of Hall of Famers are also trying to help Zion, as Chuck shared a story of being called “fat and lazy” by NBA legend Moses Malone, a moment that Barkley says changed the course of his career.

At the beginning of November, head coach Willie Green said that the former Duke University power forward — who is still just 21-years-old, mind you — was another “two or three weeks” away from a return to the court, meaning Zion could make his season debut sometime this month. If he takes Chuck’s advice, perhaps he’ll shed some LBs before then.

RELATED: Charles Barkley Reveals His Bosses Won’t Let Him Joke About San Antonio And Their ‘Big Ole Women’ Due To Cancel Culture