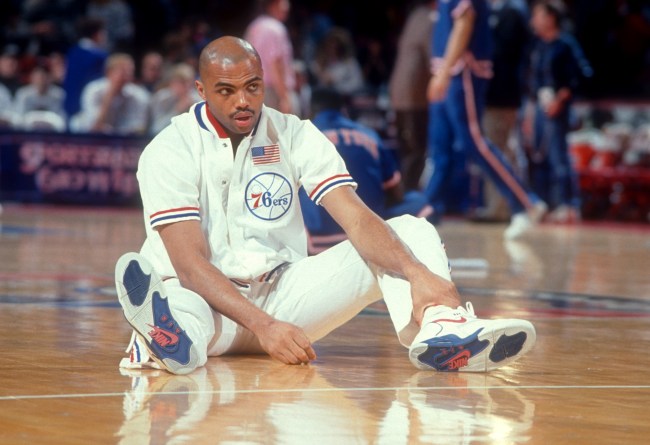 In 1992, the Philadelphia 76ers had a trade offer on the table from the Los Angeles Lakers.

According to a Philadelphia Inquirer story from that time period, the deal was allegedly Charles Barkley and Ron Anderson for James Worthy and Elden Campbell.

The 1992 Sixers were near the bottom of the league, ending the season with 35-47 record. The Lakers were slightly better, finishing 43-39.

But Los Angeles had a strong roster thanks to Hall of Fame players like Magic Johnson and Vlade Divac and strong secondary players like A.C. Green and Sam Perkins.

Barkley wanted out of town and the two teams had a trade that was nearly done.

So, Sir Charles started drinking early to celebrate. He drank a little too early.

The deal fell through, but Barkley still had a game to play.

Barkley recalled the story during an appearance on The Lowe Post podcast with ESPN’s Zach Lowe.

My agent calls me one morning and he says ‘hey, you’re going to get traded to the Lakers today. And me and my friends, we go out and celebrate and get drunk around noon….

“He calls me later and says ‘hey you’ve been traded to the Lakers, they’re going to finalize the deal and I’ll get back to you.’

“I’m on cloud nine, he calls me back three hours later, it’s like 3:30 now, he says, ‘The Sixers backed out of the deal.’ And I’m drunk as [bleeped expletive] and we got a game that night, and I’m like ‘what? What are you talking about?’ And he’s like ‘the Sixers were scared to pull the trigger.’

So I’m like ‘you’re kidding me, dude we got a game tonight and I’ve been drinking since noon.’ The one thing that’s funny, I don’t even know how I played that night. I think I might have played so bad because I was so angry the Sixers didn’t pull the trigger, and then it’s just suffering the next two or three years.”

Barkley did end up get trading out of Philadelphia, but not until that summer. The future MVP was shipped to Phoenix, where he led the Suns to the NBA Finals.