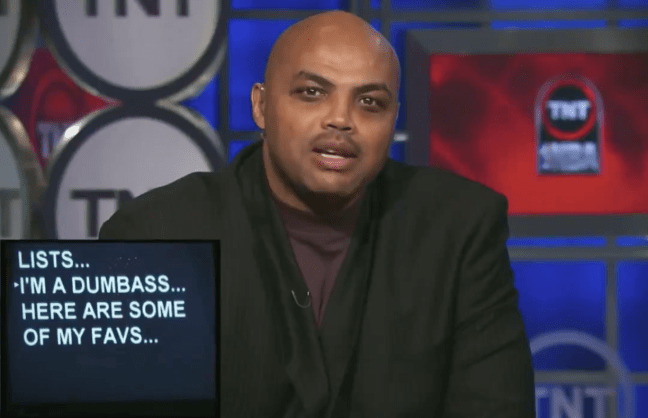 When you consider most professional athletes spend the bulk of their life living and breathing whatever sport they play, it’s easy to understand why they might feel a bit lost when their career inevitably comes to an and they’re forced to figure out what the hell they’re supposed to do for the rest of their days.

Even if you retire with an ungodly amount of money to fall back on, there’s only so much you can do to keep yourself occupied. As a result, a lot of people tend to turn their attention to other ventures, and if you took any communications classes in college, you probably know why so many athletes opt to give broadcasting a shot after they walk away from the game.

Charles Barkley may have pursued a business management degree while playing at Auburn, but thanks to his natural charisma and incredible sense of humor, he had no trouble making the jump to television when he joined Inside the NBA at the start of the millennium shortly after he hung up his sneakers after 16 illustrious seasons in the league he now covers.

It didn’t take long for the Hall of Famer to make a name for himself as an analyst thanks to the various shenanigans he engaged in alongside Kenny Smith and Ernie Johnson, and ever since Shaquille O’Neal joined the lineup in 2011, no crew in sports broadcasting has come close to providing the world with more entertainment than that formidable quartet.

Barkley recently celebrated the 20th anniversary of his first appearance on the panel and Inside the NBA honored the achievement by digging through the archives to put together an amazing highlight real featuring some of his most memorable antics from the past two decades.

While his hilarious feud with the women of San Antonio is noticeably absent, it still features some vintage Barkley moments, including when he kissed a literal ass after a donkey was brought into the studio, revealed he might not know how counting works, and pulled a Ron Burgundy while reading off the teleprompter.

Join us in celebrating Chuck’s 20th year with NBA on TNT! 😂🎉 pic.twitter.com/Ztl5JNbkqF