Charles Barkley Responds To LeBron James Calling Him Out For Spitting On A Kid, Being A Degenerate Gambler, Etc. 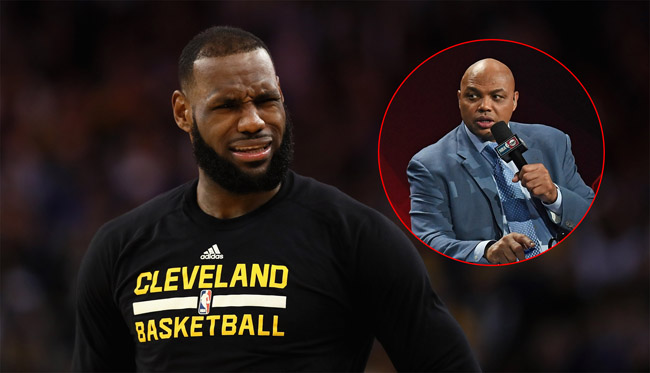 By now, you’re probably well aware of the ongoing feud between LeBron James and Charles Barkley, ignited after Barkley repeatedly said LeBron James was being “whiny” during James’ first losing month of his career since 2006. LeBron shot back with a slew of personal insults against Sir Charles, most, if not all of which, were rooted in truth. LeBron’s jabs at Barkley are in bold.

“I’m not the one who threw somebody through a window.”

This happened. Barkley, tossed a man through a glass window during a 1997 incident in Orlando where someone threw ice in his face.

During his 1991 season with the 76ers, Barkley took exception to a fan taunting him behind the 76ers bench. He hawked a loogie at him, but instead missed and hit a young girl. He was suspended, and claims that moment changed his life.

“I never had unpaid debt in Las Vegas.”

In 2008, Barkley almost got put in the slammer for failure to pay a $400,000 gambling debt. He later overnighted a cashier’s check to the Wynn Las Vegas.

He said this exact thing in a Nike commercial during his playing days.

“I never showed up to All-Star Weekend on Sunday because I was in Vegas all weekend partying.”

This is unclear, but Barkley has had a history of trying to dodge his All-Star responsibilities, even telling fans not to vote for him one year.

“I have no problem with what LeBron said. Some of it was true. I did pay my debt, that’s not true. I was never late to the All-Star Game, so that’s not true. But I don’t overreact, I’m not gonna say anything personal, or anything like that. I stick by what I said. He was all whiny and everything last week.”

“I’m not gonna get upset that someone said something bad about me, I’m not like 12 years old,” Barkley said. “My initial criticism was fair, and I’m good with that.

“I think when you don’t like the message you just kill the messenger. Some of the things he said about me were correct, that still does not make my message incorrect.”

Barkley stood by his initial comments about James, which are valid considering LeBron is bitching about playmakers when he’s got one of the best point guards in the league in Kyrie, Kevin Love (currently injured), and just picked up sharpshooter Kyle Korver.

“Well, I thought he was whiny and complaining the last couple of weeks, talking about you got no help,” Barkley said. “And I’m just like, ‘Dude you just won the championship, and it’s the middle of the season and you’re just bashing your teammates.’ I think that that wasn’t right.”

“Listen, any time you criticize any of these young guys, you’re a hater. C’mon man, you know that’s silly,” Barkley said. “Any type of criticism of any player today, that’s the word they use: ‘hater.’ They never ask you is the criticism fair or not.”

“I’ve only met LeBron casually,” he said. “He’s always been great to me. I think I’ve been great and cordial to him, but this notion that we have to be friends — we’re never gonna be friends. And that’s not a negative thing. I’m not friends with none of these young guys. My job is to do my job.”

It will be interesting to see if LeBron apologizes or hits back at Charles. I hope he leaks a sex tape with Chuck and Doris Burke. I mean…just kidding. Kinda.