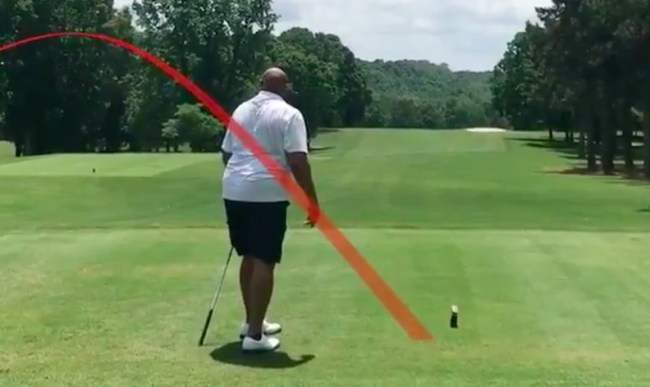 Charles Barkley is one of the more dominant basketball players of all time but the same can’t be said when it comes to golf, a pastime he somehow seems to enjoy despite being absolutely atrocious at the sport.

Barkley’s struggles with his swing are well documented and he was even the subject of a television show with famed golf instructor Hank Haney, who did everything in his power to help the former Knick get over his eternal struggle with the yips.

The Inside The NBA crew recently hosted the Black Masters, their version of the hallowed event at Augusta that featured the likes of Vince Carter, Chris Webber, and eventual winner Gary Sheffield all competing for the coveted Black Jacket.

Maybe next year, Chuck. 😂@garysheffield takes home the coveted black jacket as the champion of the 2019 Black Masters! pic.twitter.com/cxkSOfNWi4

Barkley was also a participant in the event and I had high hopes for him heading into things, as he appeared to have finally fixed his swing last year ahead of the American Century Championship in the closest thing I’ve ever seen to a miracle.

Unfortunately, it looks like Chuck is back to his old ways based on this hilarious compilation of his lowlights at the TNT-sponsored tournament, which features a series of stingers as well as a visit to the deep foliage.

Chuck had an adventurous round at the 2019 Black Masters. 🏌🏻‍♂️😂 pic.twitter.com/SJtvZRdtIu