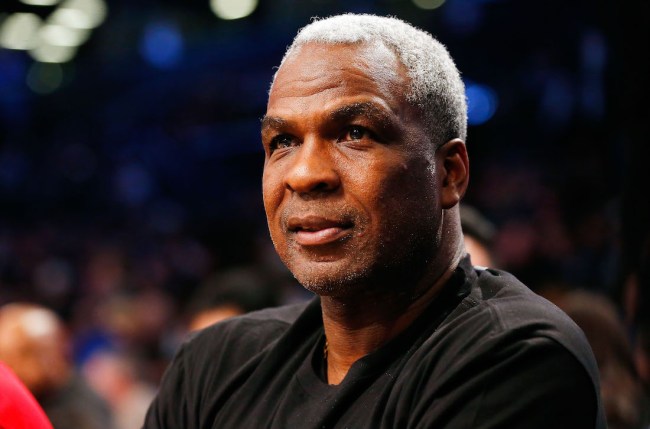 There are grudges, and then there are the types of grudges that Charles Oakley holds against the owner of the New York Knicks, James Dolan. For those who might’ve forgotten, the two have had an ongoing feud that stems from a public display of pure testosterone, with Oakley seen charging after Dolan during a game in 2017, resulting in the former Knicks legend being dragged out of Madison Square Garden by security. Yeah, it’s quite the sight.

Charles Oakley hasn’t exactly moved on from the incident — continuously bashing James Dolan for a number of different reasons. But his latest diss is actually hilarious, and shows that there’s no love lost between he and the billionaire owner.

That’s because, per the New York Post, Oakley denied the team’s offer to retire his No. 34 jersey number, which would’ve added to the great names and legacies of others hanging in the rafters. Like, if there’s one sign of respect post-playing days, it’s having a franchise retire a player’s number. But Oakley isn’t entertaining the idea, saying he thinks it benefits Dolan and the Knicks more than it does him.

Talking to James Posey’s podcast, here’s what Oakley said about turning down the offer from the Knicks’ brass.

“They came to me and said they were going to retire my jersey, do this and do that,” Oakley said on James Posey’s podcast in February. “And I’m like, ‘Nah, you can’t buy me that easy. If you retire the jersey, that benefits you, that ain’t benefitting me.’”

Oakley said he didn’t want to have it done because it was a ticket-selling scheme.

“If you want to put it outside with the flag, and people don’t have to pay to come in and see it … let them drive past and see it,’’ Oakley said. “Let it be a tourist spot.”

This is so petty, but, sadly, Charles Oakley is probably right. I mean, James Dolan sort of has a reputation around the sports world as being, uh, a bit of a jerk. That’s fine and all, but it can obviously come back to bite him in the ass — as it did here, because Oakley didn’t think the offer to retire his jersey was sincere.

Such is the latest chapter in the Oakley-Dolan feud, which is bound to extend to many more years if there’s zero trust between the former New York Knicks’ great and the somewhat slimy team owner. There’s just always some sort of drama with the Knicks, isn’t there?