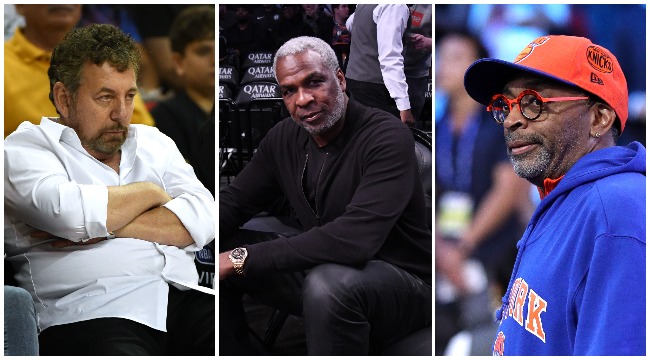 Nothing would be more New York Knicks than James Dolan’s two-decade reign of failure ending over a goddamn door.

For 20 years, we’ve been tacitly accepting the Knicks as the worst NBA team this century, despite being in the world’s biggest basketball market. In 19 full seasons under Dolan, the Knicks have advanced to the postseason just five times and won a playoff series only once. It’s almost incomprehensible how bad that is.

So, while I personally believe that Spike Lee is making a mountain out of a molehill with this entrance saga, Dolan should be haunted every now and then by the ghosts of 13 Knicks head coaches in 18 seasons.

One man who was salivating at the opportunity to bash the Knicks owner was Knicks great Charles Oakley, who was rewarded for his decade-long tenure in blue and orange by getting dragged out of Madison Square Garden by a security army.

The former NBA All-Star called in to Golic and Wingo to voice his reaction to James Dolan’s battle with his team’s most prominent fan. He pulled exactly zero punches.

“It’s a plantation over there… it’s bad.”

–@CharlesOakley34 on not being surprised with how the Knicks handled Spike Lee pic.twitter.com/1rRv5Bq8Re

“Wasn’t surprised. It’s a plantation over there. It’s bad. People don’t want to talk about it, it’s real bad over there.”

“This man has been buying tickets for 28 years, over $10 million and you curse him out if he comes in this door, that door. What is this man’s [James Dolan] problem about control? He’s so much of a control freak. And he’s hurting the whole NBA. This guy headlines every other month, every other week, with something that don’t have nothing to do with winning. It’s got to do with individuals, people’s lives. We shouldn’t be going through this.”

When will James Dolan get it? We don’t need the whole story before judging! When you have a reputation of mishandling people that represent the culture of NY basketball, like Charles Oakley — Spike Lee should never have a problem at the Garden. He is the Knicks. It’s inexcusable! pic.twitter.com/hb8aXCYI8z

It is utterly ridiculous that James DOLAN and his @nyknicks are in the news over this. I can’t believe this S&$@! Why on earth would you give Spike Lee — the No.1 supporter — this trouble? Well, we’re about to find out. He’ll be on @FirstTake at the top of the hour (11am EST) https://t.co/iIzDQPGpeG

If I were mayor I would try to get James Dolan to sell the Knicks.