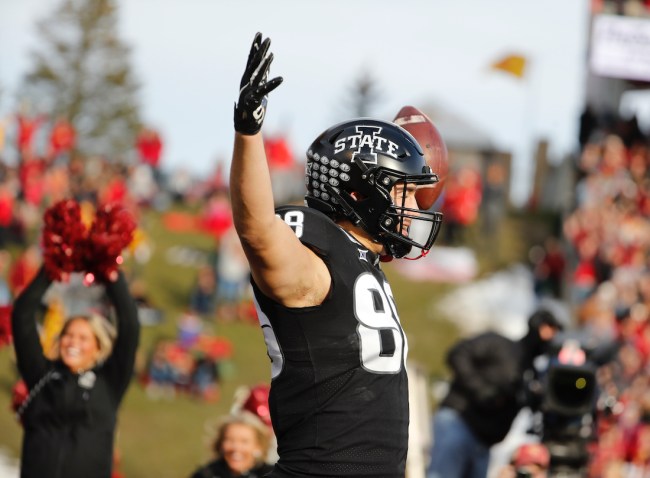 I don’t know much about Charlie Kolar, the bullish tight end for the Iowa State Cyclones, but, damn it, I sure as hell respect him. That’s because I just read the story about how the 22-year-old used a coin flip to decide whether or not he should return to college football or enter the NFL Draft. I know some people who love to gamble, but Kolar doing so with such a life-altering decision is… bold.

According to a recent story in the Des Moines Register, Kolar wasn’t swayed by the potential millions of dollars waiting for him from an NFL team, but, instead, used a coin to figure out what his decision would be — something that his parents suggested he do anytime he runs into a difficult choice. That’s absolutely amazing.

“My parents taught me this technique — when you can’t make a decision, flip a coin and you say you’re going to make a decision based on the coin flip,” the All-American tight end said. “The way you feel afterward gives you a pretty good idea of what you actually feel [about a decision].”

So, Kolar flipped a coin after the 2020 season.

“I think it landed for Iowa State,” he recalled, “and I felt good about it.”

What makes this story so interesting is that Charlie Kolar isn’t exactly some slouch just hoping for an opportunity at the next level, but a guy who, presumably, would’ve been selected in the top three rounds in the NFL Draft. As an AP Third-Team All-American, the tight end easily passed up a couple million to return to Iowa State — who are being projected to be quite the talented bunch next college football season.

Still, imagine being in your early-20s and risking your entire football career on a coin flip? That takes some balls, man. Like, you only hope this all works out for Kolar and nothing bad happens between now and the 2022 NFL Draft, because that’d be the absolute worst. Instead, I’ll just think positively and hope this kid’s decision pays off and he goes from a mid-round pick to a first-rounder, proving the gamble worked for him.

Everyone loves a good gambling story, so it’d be pretty awesome to see Charlie Kolar’s odd gamble lead to even more success for him down the line. Not too many people would’ve foregone guaranteed money from the NFL Draft to return to college — where eating Ramen and living with roommates isn’t exactly the good life.