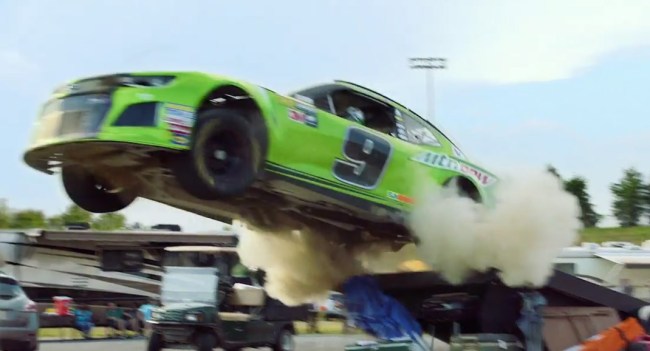 If you follow American professional stock car racing, aka NASCAR, then you are very familiar with 22-year-old Chase Elliott.

That’s because ever since Elliott was 13-years-old and featured, along with golfer Jordan Spieth, as a potential star of the future in a 2009 issue of Sports Illustrated, he has been burning up race tracks all over the country.

The son of 1988 Winston Cup Series champion Bill Elliott (he sports his dad’s familiar #9 on his Cup car), Chase won the 2014 NASCAR Nationwide Series championship – the first rookie to do so, the 2016 NASCAR Sprint Cup Series Rookie of the Year award, and recently won his first NASCAR Cup race, the 2018 Go Bowling at The Glen.

And now, this weekend, Chase Elliott is making his TV commercial debut for Mountain Dew.

In the spot which you can watch below before it airs, Chase tears his way around the race track, into the parking lot, and jumps off a ramp to get to a can of Mountain Dew which has been launched into the air from a slingshot by a racing fan, as one does.