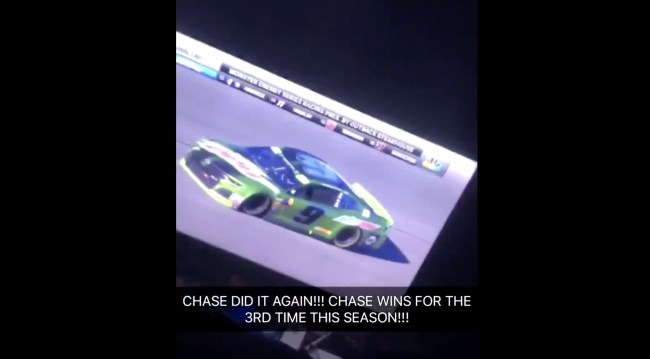 Chase Elliott is officially on a hot streak. After wins at Watkins Glen and Dover, the 22-year old driver of the #9 Chevy has his eyes on a NASCAR championship.

Today Chase Elliott won his second victory in three races at Kansas Speedway, earning him a position in the Round of 8. He now advances with some of the biggest names in NASCAR: Kyle Busch, Kurt Busch, Martin Truex Jr., Kevin Harvick, Clint Bowyer, Aric Almirola and Joey Logano.

The end of the race was pure electric:

Chase Elliott gets his 3rd career win as he wins at Kansas! Reaction by @ajslam1999

Here’s his call when Ryan Blaney won a few weeks back:

Beyond stoked to have @ajslam1999 do LIVE reaction coverage for us of the @nascar @talladegasupers race this weekend on our Instagram stories. Look for his coverage to begin at 3pm ET with the green flag. Here’s his incredible reaction to @ryanblaney10 winning at the @charlottemotorspeedway #roval the other week. Super amped for him to take over on Sunday! 🏁🏁🏁

That Mountain Dew car Chase Elliot was in today was pretty sexy, too.

Reminder: Free wings at Hooters tomorrow in honor of Chase Elliot getting the checkered flag: