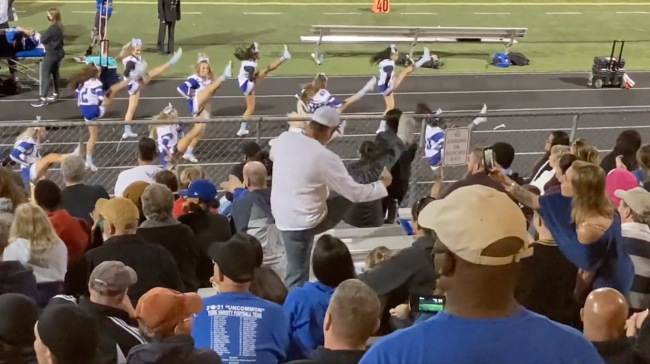 York High School football put a beatdown on its crosstown rival on Friday night. A lengthy parade preceded the homecoming game in Yorktown, Virginia and the entire town was out for the game against Tabb High School.

In front of a packed crowd, running back Jordin Lennon put on a show en route to a 44-18 win.

The Falcons won the coin toss and elected to receive. On the second play from scrimmage, Lennon swept left for 52 yards and followed it up with a 20-yard touchdown off the tackle on the next snap.

Lennon went on to score four touchdowns on the night, but he wasn’t the real star of the night. That would be Rolland “Hekili” Holland, better known as “Cheer Dad.”

Holland’s daughter is a part of York’s varsity cheerleading squad and after each touchdown, the girls perform a specific routine.

Cheer Dad knows the entire thing and joins in with the squad from the stands. He goes all-out in sync with his daughter and her team. It’s amazing.

While the entire thing is fantastic, the leg kick at the 23-second mark is the highlight. He gets some serious height and really gets that foot up there!

Holland’s enthusiasm is unmatched and his energy does not fail to translate to the rest of the crowd. You might remember him from his viral performance last year:

Shoutout to you, “Cheer Dad” Holland. You understood the assignment and you crushed it.