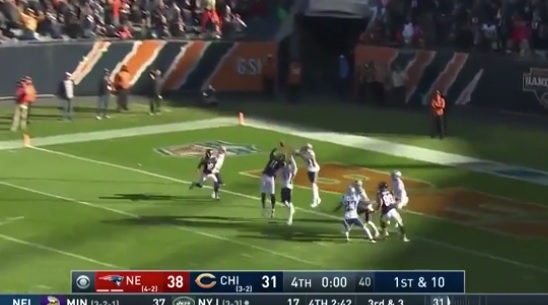 The Chicago Bears were really close at forcing overtime against the New England Patriots unfortunately they were a bit short.

Watch as the Bears, who were down 7 points, complete a last second 50+ yard hail mary pass but weren’t able to tie the game after receiver Kevin White didn’t get into the end zone.

WOW. Mitch Trubisky just launched a massive Hail Mary throw as time expired. It was caught by Kevin White at the 1-yard line, but he was tackled short of the goal line.

White still got slandered by the Internet despite making the amazing catch.

If you trust Kevin White to win you a football game, you get exactly what you deserve.

Holy shit Kevin White What is you doing https://t.co/tJTt2Wwb6O

Kevin white was inches away from the only positive play of his career https://t.co/duRZ2tXdyR

I hate Kevin White too, done ABSOLUTELY NOTHING FOR US EVER

Kevin White: A Yard Away From Relevance

Coming to theaters near you. pic.twitter.com/rUQ9XfKehY

Kevin White might have just put himself back on the map with that near miracle.

Kevin White has the best play of his career and it’s for nothing…for nothing.