The Chicago Bears Signed A Kicker Named Blewitt, And The Jokes Just Wrote Themselves 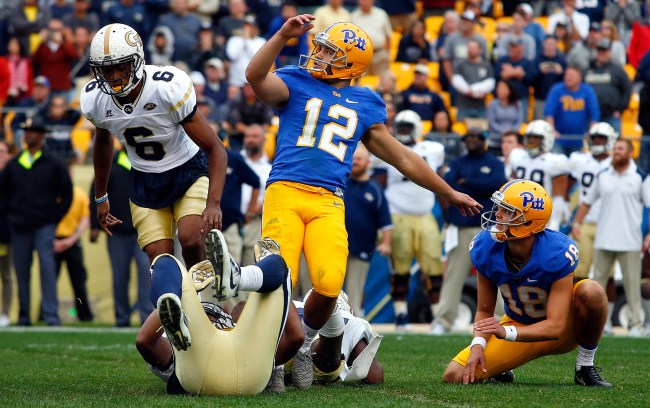 The Chicago Bears’ front office is just trolling everyone, right? I mean, they have to be, at least on some level. There is no way that anyone involved in the signing of free agent kicker Chris Blewitt from the University of Pittsburgh did not know that jokes would immediately be made when they did this. It’s just impossible.

You can’t release Cody Parkey, sign a kicker to possibly replace him named Blewitt, and not expect it.

So who is Chris Blewitt? I know Bears fans are certainly curious.

According to the University of Pittsburgh’s web site, Blewitt finished his career as Pitt’s all-time kick scoring leader, eclipsing a record that stood for more than four decades.

Blewitt is also the Panthers’ all-time leader in field goals. Another plus.

He also kicked five game-winning field goals while at Pitt. (Can I get a “hell yeah,” Bears fans?) And he kicked a school-record 10 PATs in the final game of the 2016 regular season versus Syracuse in a 76-61 victory.

I just can’t get over the possibility of a new Chicago Bears kicker named Blewitt.

Too soon, Bears fans? My bad. At least I am not alone.

Having a kicker named Blewitt is like having a lineman named Holditt.

The Bears are signing a kicker and hopefully his name does not decide his destiny.

Because Chris Blewitt is a full sentence. https://t.co/3pDwHnWcoI

So they go from the kicker who literally blew it (Parkey) to signing a kicker who has the name “Blewitt.”

A 69% success rate in college for somebody named Blewitt. More than 2/3 of the time, he doesn't choke.

It's just perfect. The Bears really nailed this one. https://t.co/tXIYB2xh7e

What do some people do? Welcome him to Chicago? Nope! Act like assholes b/c his last name is Blewitt. pic.twitter.com/nYFjoR4gDT

Blewitt, a free agent without NFL experience, made 10 of 17 FGs his senior season at Pitt.https://t.co/IGkkLtkFYl pic.twitter.com/yeB5Oh7teR

I’m sure everything will work out just fine.