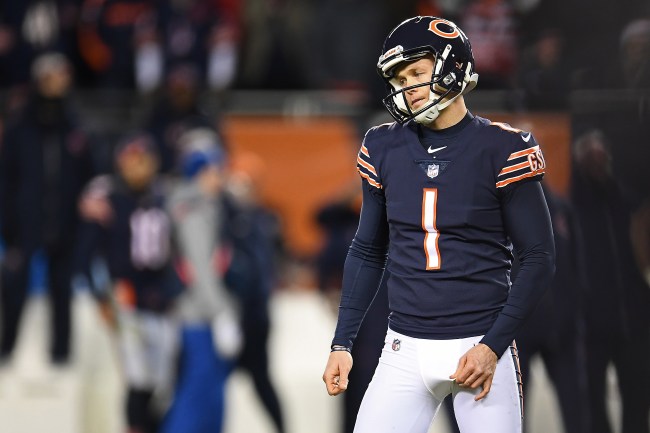 Cody Parkey was supposed to be the hero, but he quickly turned into the goat — and not of the Tom Brady variety, either. That’s because, after being iced for a game-winning field goal attempt in an NFC Wild Card Game against the Philadelphia Eagles, the kicker hit both the upright and the crossbar, missing the crucial attempt that would have sent the Bears to victory.

We all know how the story went from there, with Chicago fans absolutely ripping Cody Parkey, with the kicker being booed off the field as he made his way to the locker room, and then being mocked by people for the following week after his awful miss. For his part, Parkey tried to play it cool and talked about it being part of his job description, but in the end, the Chicago Bears decided to move on from him.

That officially happened today, with the team announcing Parkey’s release. A former Pro Bowl kicker, as Ian Rapoport mentioned, he probably won’t have too difficult of a time to find more work. Oh, and even if he does, the dude is still guaranteed a hefty $3.5 million from the Bears, so, yeah, they basically paid him to go away; so all isn’t too bad for Cody Parkey.

The #Bears have decided to release K Cody Parkey at the start of the league year, sources say. A fresh start is welcomed by both parties, and the Pro Bowler will likely find work quickly. He’s still due $3.5M guaranteed on his 2019 contract.

Upon hearing the news of Cody Parkey’s release, Twitter did what Twitter always does — put out hilarious things that entertain the Internet. And because we’re all fans of those types of things, here are some of the best reactions to Parkey getting the boot from Da Bears.

Now we know what they got Khalil Mack for his birthday.

It’s hard not feeling bad for this guy, but, hey, kicker’s come and go all the time, so one with his resume will unquestionably find work sooner rather than later. Hell, Cody Parkey could become the next Adam Vinatieri and find himself kicking with a gray beard at the age of 40-something, so, hopefully, that playoff miss doesn’t define his entire career — just don’t tell Bears fans that, though.