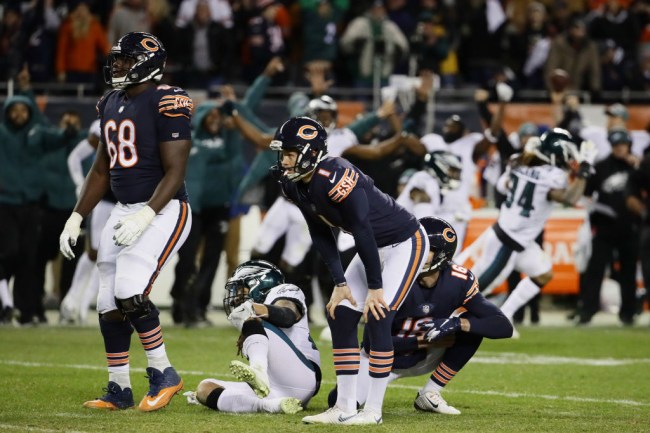 Chicago Bears fans had seven years of playoff baby batter stored in their engorged collective ballsacks and 60,000 of them were at Solider Field Sunday desperately hoping to climax. Their fate rested on the right foot of Bears kicker Cody Parkey.

The 26-year-old former Pro Bowler had hit the upright an astonishing six times this season to highlight a less than stellar first season with Chicago. The Auburn product missed seven kicks during the regular season, three of them being extra points. In a Week 10 game against the Lions,  in which he hit the uprights four separate times.

This would be foreshadowing for the biggest kick of Parkey’s life–a 43 yarder in the waning seconds of the fourth quarter to send his Bears to the divisional round. The kick, which appeared to be tipped by Eagles’ Treyvon Hester, sailed into the left upright, boinked off the bottom crossbar, and bounced back into the end zone, ending the Bears season and making Cody Parkey the most hated man in Chicago.

It didn’t matter that Parkey hit the previous three field goals and scored 9 of the Bears 15 points. He was booed relentlessly as he jogged off the field for the last time this season.

After the game, at the lowest point of the Parkey’s career, he sat in front of droves of local and national media and manned the fuck up.

“You can’t make this up. I feel terrible. I let the team down. That’s on me. I have to own it. I have to be a man. Unfortunately, that’s the way it went today.”

“I thought I hit a great ball and was trying to play the wind. There’s really no answer to it. I didn’t make it. I take that loss on me. The sun is going to shine tomorrow, but unfortunately this one is going to sting for a while.”

“It’s one of the worst feelings in the world to let your team down. I feel terrible. Continue to put things into perspective, continue to just put my best foot forward and just sleep at night knowing that I did everything in my power this week to make that kick and for whatever reason it hit the crossbar and the upright.”

I can’t imagine how much it must suck to a cameras and lights shoved in your face and asked to comment on the biggest, most public fuck up of your life. Good on Cody Parkey for holding it together and being a pro about it.