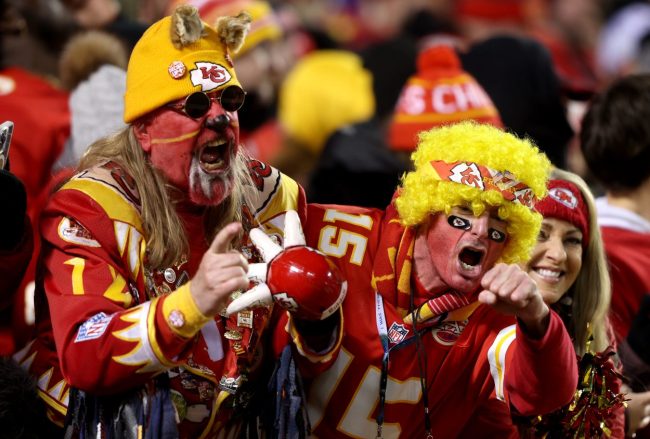 Proposals at sporting events are very risky. One Chiefs fan, however, has taken the risk to a new level.

Obviously, the person proposing at the game runs the risk of their significant other saying no in front of a massive crowd. That would be embarrassing.

Perhaps more importantly, proposing at a sporting even runs the risk of embarrassment even if the other person says yes. Some people don’t want to have all of the eyes on them. Some people would be horrified to find themselves on a jumbotron at a game for which said person just wanted to be a fan.

Or, like one Dolphins fan earlier this season, you might miss the proposal all together because you’re in the bathroom or getting a beer. And, on top of it all, the game is about the game. Adding the proposal element takes away from the game itself and the proposal itself, combining the two into one. It gets even worse if the team that you are rooting for goes on to lose.

Although there are exceptions to every rule, but proposals at sporting events should be widely considered as a no go.

Especially the way that this Chiefs fan approached his proposal. During the first half of Saturday’s AFC Championship game, the camera showed a man just beyond the endzone with a sign.

It read: “Rachel Will You Marry Me?”

Now, punctuation issues aside, Rachel does not appear to be next to him, in front of him or behind him. The man is proposing to his girlfriend through a TV broadcast from a game she is not attending. Hm.

Chiefs fan appears to be proposing to somebody who is not at the game. How romantic. pic.twitter.com/lzyTctTOvm

If you’re going to propose at a sporting event, that is your prerogative. But this seems like a bad approach.