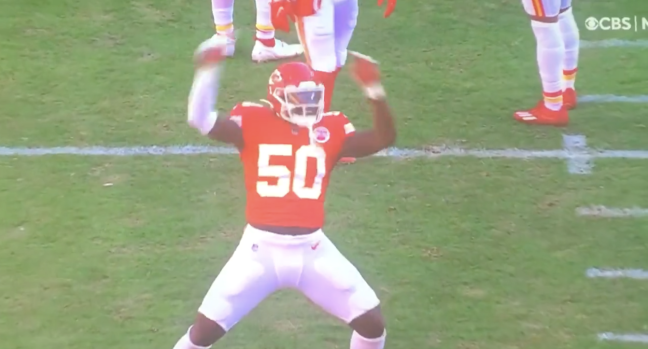 Las Vegas did not fare well in the first half against Kansas City on Sunday. After completely disrespecting the Chiefs during pregame, the Raiders proceeded to go down 35-0 in the first 29 minutes before kicking a sad field goal to make it 35-3 at the break.

It was a blood bath.

In response to the great play from their team and poor showing from their opponents, fans at Arrowhead Stadium decided to lay it on. Adding insult to injury, the 70,000 Chiefs faithful in attendance broke out into a very loud anti-Raiders chant. It was so loud that a chorus of “Raiders suck” could be heard on the CBS broadcast of the game.

Meanwhile, Kansas City linebacker Willie Gay Jr. encouraged the booming chant by hilariously pumping them up in between plays.

Neither of the announcers on the call acknowledged the chant, but it spoke for itself. The Raiders suck and Chiefs fans wanted to let the whole world know.

Here is how it sounded inside the stadium:

It was organic, coherent, and boisterous.

Imagine how demoralizing it must have been to be on the field for Las Vegas in that moment. Not only are you down by five touchdowns in the first half, but the entire stadium is telling you, in unison, how terrible you are.

That’s what you get for stomping all over the midfield logo, I guess. Tough day to be a Raider.