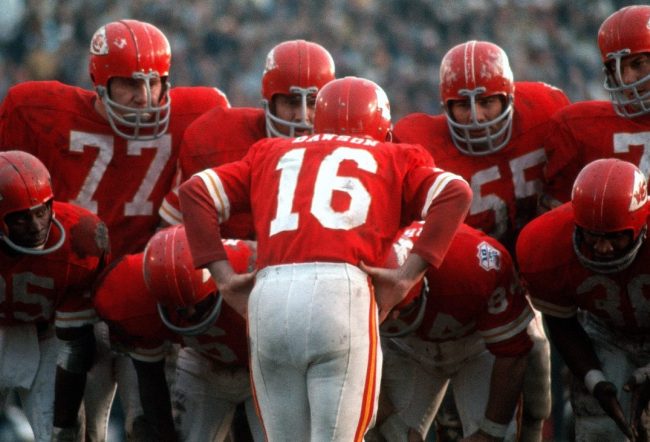 The Kansas City Chiefs is one of the most historic franchises in the NFL. They faced off against the Green Bay Packers in the league’s first-ever Super Bowl. They were led by legendary quarterback Len Dawson, who recently passed away. Patrick Mahomes shared a touching message to Dawson upon his death.

After Len Dawson’s passing, Patrick Mahomes showed his appreciation for the legendary quarterback. Chiefs fans mourn on Wednesday, as Dawson played a huge role in the franchise’s history. He helped lead Kansas City to its first-ever Super Bowl appearance against the Green Bay Packers (Super Bowl I). Additionally, he led his team to win Super Bowl IV against the Minnesota Vikings.

RIP to the legend Len Dawson. The legacy and impact you made on Kansas City will live on forever. Prayers to his family 🙏🏽🙏🏽 pic.twitter.com/AKMhxoUFYH

After retiring from the NFL, Len Dawson worked as an analyst for the Chiefs. He’s been a face of this franchise for decades. He will truly be missed after living a full life. After retiring from commentating in 2017, Dawson eventually passed away in 2022 due to issues with prostate cancer and quadruple bypass heart surgery, per Medico Topics. For anyone not entirely sure who Len Dawson is, he’s also known for this absolutely epic photo.

Obviously this one too. pic.twitter.com/MrfzStLcDP

The Chiefs lost a good one, but he will forever be remembered for his excellent play as a quarterback and being a major media member for the team. Patrick Mahomes and company will surely be accompanied by Len Dawson throughout the 2022 season.