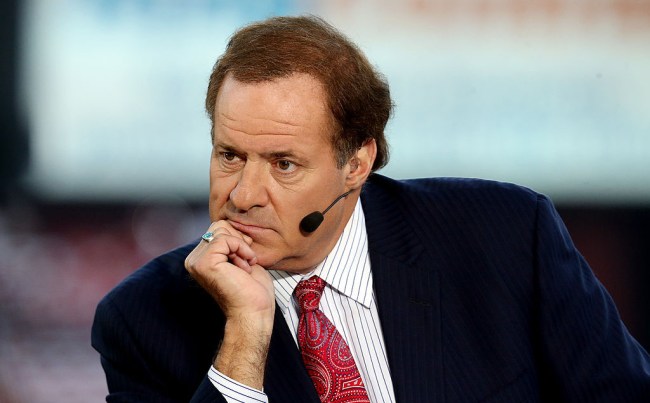 Katherine Berman, the wife of legendary ESPN broadcaster Chris Berman, was killed in a car crash on Tuesday afternoon in Woodbury, Connecticut.

According to the Hartford Courant…

In addition to Berman, 67, of Peach Tree Court in Cheshire, Edward Bertulis, 87, of Welles Street in Waterbury was killed, police said Wednesday morning.

Troopers are investigating the possibility that Bertulis suffered a medical emergency right before Berman’s car crashed into the back of his car, a state police source told the Courant.

Details of the incident were also reported…

According to the state police, the 2003 Lexus SC 430 driven by Berman and 2003 Ford Escape X driven by Bertulis were headed east on Sherman Hill Road, about a mile and a half from the Quassy Amusement Park in Middlebury, at the time of the crash. The Lexus — owned by Chris Berman — rear-ended Bertulis’ Ford and continued traveling east, veering off the road to the right.

The Lexus went down a small embankment and overturned in a small body of water, state police said. The Ford also went off the road, striking a utility pole and landing in the middle of the road on its roof.

Bertulis was taken to Waterbury Hospital, where he died, police said.

“This is a devastating tragedy and difficult to comprehend. Chris is beloved by all his ESPN colleagues and for good reason: He has a huge heart and has given so much to so many over the years,” he said. “We know how much his family means to him and all we can do at a moment like this is give him the love and support he will surely need at this hour. Our thoughts and prayers are with Chris, Meredith, Doug and the entire family.”

This now makes the second spouse of a legendary broadcaster to have died in a motor vehicle accident this year as long-time WWE announcer Jim Ross lost his wife Jan in a Vespa crash back in March.

Katherine leaves behind Chris and their two children. May she rest in peace.