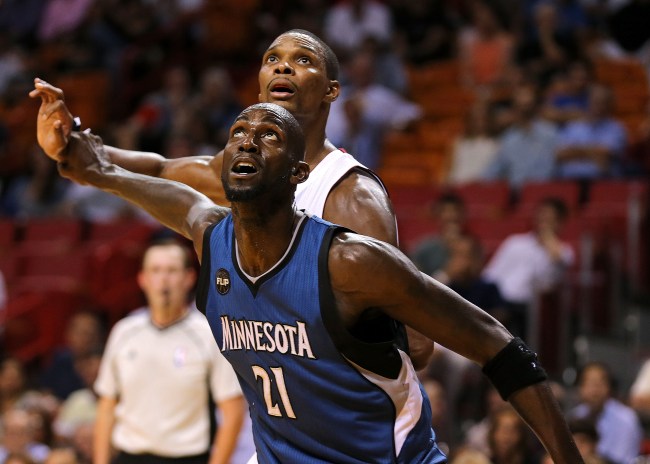 Chris Bosh, a two-time NBA champ and nine-time All-Star, was one of the most agile big men of his generation. While Bosh is best remembered for being the third banana on the Miami Heat’s Big Three alongside LeBron James and Dwyane Wade, without the power forward stretching the floor and sacrificing his own stats for the good of the team, there’s a good chance Miami wouldn’t have won back-to-back titles while making four-straight NBA Finals’ appearances.

Unfortunately, once the Big Three broke up in 2014, Chris Bosh dealt with some serious health issues, preventing him from playing hoops much longer at the age of 31, which cut into the perception of how good he really was. With Bosh set to formally announce his retirement from the NBA at a ceremony from the Miami Heat where they’ll be retiring his jersey, the former star has been making the rounds in the media lately, telling some stories about his playing days.

A recent one was on Bill Simmons’ podcast, where Chris Bosh recalled a time that well-known trash-talker, Kevin Garnett, called him a “momma’s boy,” and that, for whatever reason, Bosh just couldn’t understand what the insult meant, leaving him tossing and turning all night long. Here’s a transcript of what Bosh told Simmons about the incident, per FTW.USAToday.

“I couldn’t sleep. I was up just late at night like, ‘What is that supposed to mean? A momma’s boy? Who is he talking about? It’s 4 a.m., you know, I gotta be up in a couple hours.”

Who knows why being called a “momma’s boy” confused Chris Bosh so much, but, apparently, it really got under his skin. Remember, though, Kevin Garnett is one of the top-10 best sh*t-talkers in NBA history — and a guy who once allegedly told Carmelo Anthony that his Melo’s wife tastes like Honey Nut Cherrios — so it was more a mind F*ck than anything else when you got on the floor with KG.

To watch the full interview between Chris Bosh and Bill Simmons, take a peek at the video below, via The Ringer’s Twitter account, with the above story about Garnett starting at the 0:35 mark.

If this isn’t classic Garnett, we don’t know what is. Here’s to hoping it was the only time Chris Bosh lost sleep over someone talking crap to him, too, because that just sounds kind of soft.