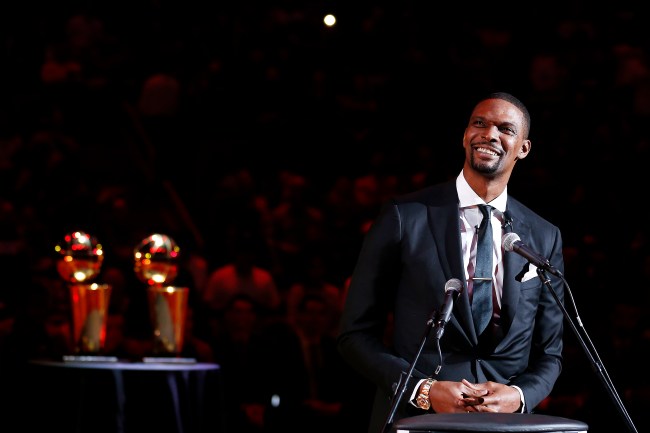 Chris Bosh was always a little underrated as the third banana on the Miami Heat’s Big Three, wasn’t he? Think about it for a second; he was versatile and could play down low, space the floor by stepping outside, and had the vision and basketball IQ to help superstar teammates LeBron James and Dwyane Wade be themselves out on the court. It’s why the team went to four-straight NBA Finals while the three were together, winning back-to-back titles in 2012 and 2013.

Unfortunately, Chris Bosh’s NBA career got derailed by a serious health issue, when blood clots formed in his body, which, ultimately, led to him retiring at the age of 31. Although the former All-Star had to call it quits because of health reasons, he tried to overcome them and make a comeback attempt, but he decided against it because of a few factors — one of which was the major injury to Boston Celtics guard Gordon Heyward.

“After Gordon Hayward dislocated his ankle, that’s when I kinda was like, I tell people, that took the wind out of my sail,” Bosh told Le Batard.

“[Hayward is] a superstar. He’s a superstar and look at his ankle. His ankle was out of its socket. And, that was my first time watching basketball in a while. I said, ‘Yo, I’m going to get back connected with the game.’ First five minutes of me saying, ‘Let me get back into this. Let me get my mind in this.’ I didn’t watch any basketball last year. [I was] too mad. I was still working out, still in shape. But I need to watch the game. I need to know what is going on in the league, and within the first five minutes, his ankle was out of his body, and I am watching it on live TV … I was just like, ‘Oh man.’ I didn’t have the same enthusiasm in those workouts after that.”

As Chris Bosh explains, seeing another superstar go down with such a brutal injury led him to at least lose enthusiasm in an attempted comeback. But that wasn’t the only thing that led him to stopping, because he also pointed out that it was Kobe Bryant winning an Oscar for his documentary Dear Basketball that also impacted Bosh’s decision to call it quits.

“You know who did it for me? Kobe winning the Oscar. That was kinda like, ‘Damn dude!’,” Bosh said. “I was talking to Kobe. We had dinner one time, and he was telling me, ‘Yeah, yeah, you know,’ talking about the Oscar. ‘This dude is nuts. Kobe is crazy. I know he got 81 on us, but he’s crazy. He thinks he is going to get an Oscar! Ha ha ha ha. Isn’t that crazy, guys?’ And then you watch him go across stage, and it’s like, ‘Ah man! Dude!'”

Although Chris Bosh had probably hoped to play in the NBA much longer, it’s cool to hear him open up about why he gave up on trying to return. It’s also awesome that, like Bryant, he has other interests that could lead to success outside of just basketball, which isn’t something a lot of pro athletes realize a lot of times.

With his recent jersey retirement from the Miami Heat, Chris Bosh’s days in South Beach will forever be remembered. Now it’s time for his next chapter, which, given his success on the basketball court, will probably be pretty big.