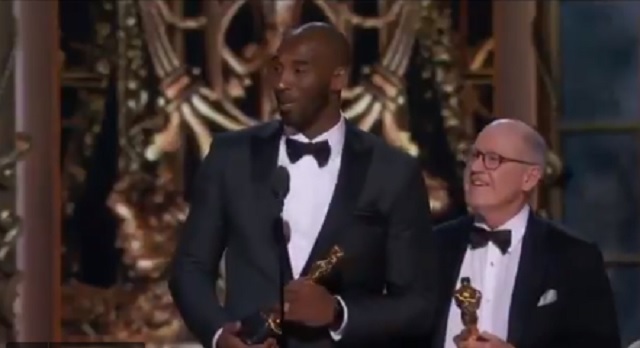 Los Angeles Lakers guard Kobe Bryant can add Oscar winner to one his many accomplishments after he won the prestigious award for his involvement in the “Dear Basketball” which won the Best Animated Short Film award.

In his acceptance speech, Kobe took had a thing to say about basketball players who are supposed to “shut up and dribble” according to some people.

Kobe takes a shot at Laura Ingraham's "Shut up and dribble" quote at the Oscars pic.twitter.com/40CbggK7jw

Of course Kobe is referencing Fox News host Laura Ingraham, who last month infamously told NBA superstar to “shut up and dribble” for criticizing the President of the United States.

“The No. 1 job in America, the appointed person is someone who doesn’t understand the people,” the athlete said at one point during the interview, adding that some of the president’s comments are “laughable and scary.”

Ingraham responded to his comments Thursday, calling them “barely intelligible” and “ungrammatical” on her Fox News program The Ingraham Angle.

'Shut up and dribble' — Fox News's Laura Ingraham to LeBron and Kevin Durant after their criticism of President Trump pic.twitter.com/0BlokQDIIl

Ingraham is going to have to keep taking L’s for incredibly dumb take. As for Kobe, dude is amazing and continues to be successful in whatever he does.