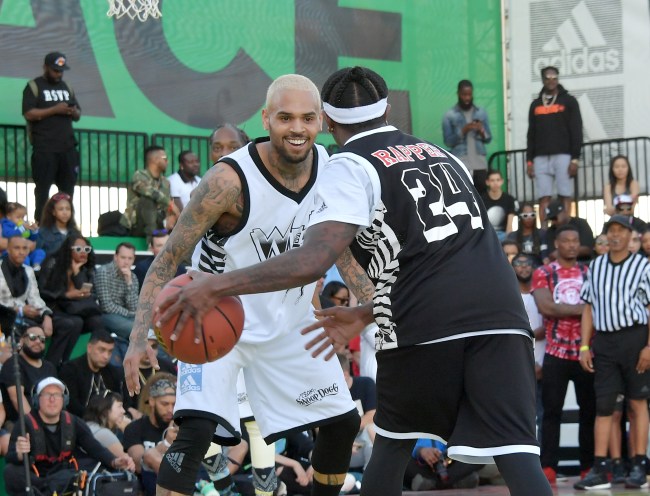 Chris Brown’s known more for his hip hop career than anything else, but there’s at least someone who thinks he could’ve made a name for himself in another career. That would be former NBA player Metta World Peace, who claims that Brown has such badass basketball skills that the one-time NBA champ thinks he could’ve made it to the league had he decided to focus on it rather than music.

Appearing on Van Lathan’s The Red Pill podcast, the former pro hooper started talking about a few entertainers and their hoops dreams. That led Metta to talk about Chris Brown, with the guy describing how impressed he was with the rapper’s game while the two played together about a decade ago, via Complex.

“I thought Chris Brown should have been in the league,” the former-NBA world champion told Lathan. “Before, 10 years ago when I was playing with Chris? Yeah, definitely. He was better than a lot of people.”

World Peace went on to break down his game into specifics. “He was still young — didn’t have a shot — but what young player has a shot?” World Peace said. “I like that he was very smooth… really good penetrator and really aggressive when attacking the basket. I thought he was one of the best ones I’ve seen.”

That’s some really high praise, especially considering Metta World Peace was no scrub himself, not only reaching an All-Star Game and winning earning accolades for his defensive ability, but also because he was part of teams that included the likes of Kobe Bryant. To think that Chris Brown’s game was good enough to impress a guy like that is saying something. But, hey, just take a look at this highlight video of Brown and it’s actually easy to see why World Peace thinks the rapper had the talent to reach the NBA.

Metta World Peace also offered up some thoughts on a few other rappers who hoop, specifically calling out both the Game and Young Buck as being legit ballers, too.

We’d all like to think we’re talented at more than just a few things, but hearing Metta World Peace describe how good Chris Brown, the Game and Young Buck are at basketball — and that they’re talented AF in music — kind of makes me feel pretty inferior.