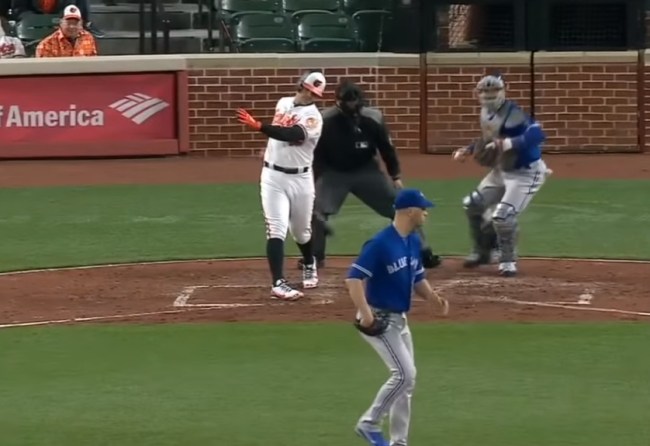 The National League was founded in 1876 and in those 143 years and over 217,235 games played. In all of those years and all of those games, nobody has gone more games in a row without a single hit more than Chris Davis.

In 2018, Davis batted a pitcher-like .168 over 128 games. That abysmal batting average is the worst for any qualified player in Major League Baseball history since the league adopted the current 162-game schedule. That’s not the record you want to hold.

On Monday night, Chris Davis made history in the worst possible way. Davis lined out to left field in the bottom of the fifth inning in the Orioles game against the Oakland Athletics. This sad out made Chris Davis the owner of the longest hitless streak in MLB history with 47 consecutive at-bats without a hit. It wasn’t like Davis was facing Cy Young on Monday because Davis was the only Orioles starter not to reach base in Baltimore’s 12-4 win.

The anti-Joe DiMaggio continued the streak by striking out in his next two at-bats and now gone 0 for his last 49, the embarrassing streak dates back to September 14, 2018. Infielder/outfielder Eugenio Velez should send Davis a gift basket because he was the previous owner of the dubious record for longest hitless streak when he did in during the 2010 and 2011 seasons while on the San Francisco Giants and Los Angeles Dodgers.

It doesn’t get better for the Baltimore Orioles because they still owe Davis $92 million in guaranteed money and they’ll be paying him for a long time. That contract has deferred payments through the 2037 season. Bobby Bonilla eat your heart out. Get excited O’s fans!

Orioles announce 6,585 fans at Camden Yards tonight. The lowest in the history of the ballpark for an open-admission game. The previous low was a year ago, April 9, when they had 7,915 against Toronto.

Orioles fans are already asking if the Chris Davis contract the worst in history?

If the Orioles weren't paying Chris Davis $17M per year through 2022, is Manny Machado still in Baltimore? And if so, does that make the Chris Davis contract the worst in baseball history?

Chris Davis has to go down as signing the worst contract in baseball history. Move over Albert Belle, who the Orioles also gave a truckload if money for zero return.

Here's the issue: Chris Davis is making $161 million on this contract. It might go down as a top 5 worst contract in baseball history lol

How do you think Orioles feel everytime the Chris Davis check is cut? Since the signing of that contract $17M a year ‘16-22. He is hitting .195! They still owe 92 of 161M and NO one will take him! Simply the worst contract ever signed! People wonder why FA are not getting paid!

Chris Davis is officially the worst contract in baseball history. It’s not even debatable.

Is the Chris Davis contract the worst return on investment ever?

RELATED: Chris Davis Is 0-For-17 This Season, Is Making $23 Million This Year And, Oh Yeah, Twitter Has Crushed Him About It