Chris Long Rips Into DeSean Jackson For Hitler Post, Says Not Enough People Have Criticized Him For It 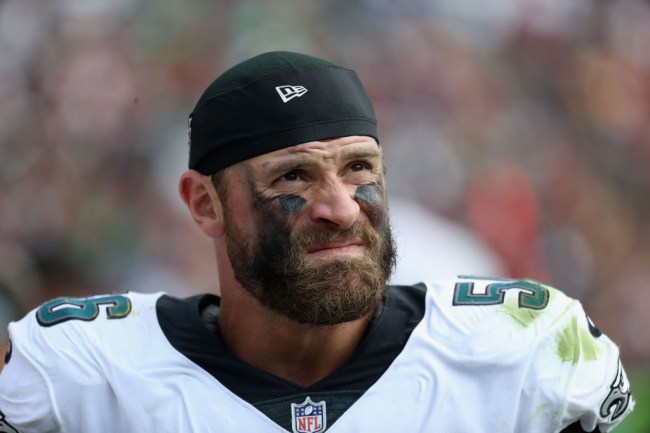 Earlier this week, Eagles receiver DeSean Jackson posted an anti-Semitic quote falsely attributed to Adolf Hitler to Instagram. Jackson has since apologized and the Eagles have released a statement about the post, but relatively speaking, it’s been quiet when it comes to teammates and fellow NFL players criticizing Jackson’s post.

One of Jackson’s teammates, Marquise Goodwin, even got defensive about the situation explaining that he wished critics were more interested in discussing Black Lives Matter instead of Jackson’s anti-Semitic post. Stephen Jackson, a prominent voice in the Black Lives Matter movement and George Floyd protests, even came out to defend the wideout’s Hitler post.

Ex-Eagle Chris Long has had enough, however, and decided to speak up about Jackson on his ‘Green Light‘ podcast. Long also spoke to the fact that, in his opinion, not enough people have spoken up about Jackson’s ‘misstep.’

“I mean, quoting Hitler is bad business, but quoting fake Hitler quotes is like a cherry on top,” Long said on his “Green Light” podcast. “I don’t know if it’d be worse if he quoted a real one or the fake one. Needless to say, it’s wrong … It seems like, and I don’t know what it is, but it seems like we’re not allowed to say, ‘Hey, that’s not good.’ It’s not good. It’s wrong, and I’m sure I have Jewish listeners. I’m against anti-Semitism, and I didn’t see and I haven’t seen nearly enough people saying, ‘Yeah, man, this was a misstep.’”

Many are pointing out the lack of reaction from the media when it comes to Jackson’s post compared to the outrage that ensued following Drew Brees’ comments about the American flag and the national anthem. Now, of course, those are two different situations involving two different things, but it’s still absolutely worth mentioning. Long touched on that, as well.

“Just like with Drew Brees, I don’t get to decide when his apology or his learning process on this thing is complete,” Long said. “All I know is that he talked bad about Jewish people, and somehow managed to use a fake Hitler quote doing it, and that is a fucking disaster, I think it’s fucked up, unequivocally.”

You can’t argue with anything Long said. As he said, Jackson “fucked up, unequivocally” and up to this point, it’s been silent in terms of criticism when you compare the reactions to Jackson’s anti-Semitic post and Brees’ statement about not kneeling during the national anthem.