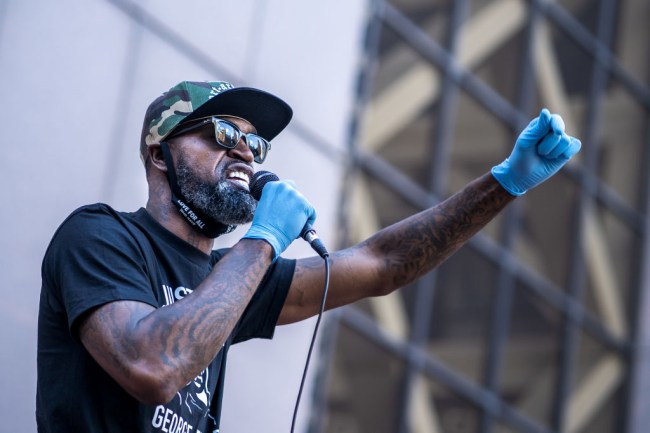 Stephen Jackson has made quite a few headlines over the past month or so following the death of George Floyd. Jackson grew up with Floyd outside of Houston and following his childhood friend’s death, Jackson has been vocal during protests about social injustice and police brutality.

On Tuesday, Jackson decided to speak out about DeSean Jackson’s recent anti-Semitic Instagram post in which he showed support of a quote attributed to Adolf Hitler.

The Philadelphia wideout has since apologized for the post and the Eagles have released a statement, but Stephen Jackson hopped online to show support of Jackson’s original anti-Semitic post.

He bluntly stated that Jackson shouldn’t have apologized and that he was ‘speaking the truth’ while ‘trying to educate people.’ In the caption of his video on Instagram, Stephen explains that he ‘loves every race,’ which is a rather questionable statement to make seeing as how he’s showing support of an anti-Semitic quote.

“NFL owners are racist. Just the facts. U speak on anything involving Jews or Whites is hate. That say shit about us it’s kool. Fuk dat. I wouldnt apologize for shit. I love every race and can’t nobody say or tell me diff. U can paint any narrative u want but that don’t stand up against facts. NFL players y’all let them treat y’all like shit. U getting a check u don’t care right. Smdh. Love for all who have love for all ✊🏿✊🏼✊✊🏻✊🏾 How long y’all gonna make them money knowing they don’t like u. Truth Hurt. Stand up for your black players Philly.”

It’s honestly hard to try and put together what Stephen Jackson is trying to say in the video, but it’s very clear that he supports DeSean Jackson’s post and is a believer in a Jewish conspiracy.

The only thing that Stephen Jackson said that makes an ounce of sense is him calling out the Eagles still employing Riley Cooper after he said the n-word. As for the statement about NFL owners and teams around the league being silent about police brutality, that couldn’t be any further from the truth. Yes, Jerry Jones has been silent, but that’s one team owner and I’m not sure if you’ve noticed, but he’s getting torched for being so deathly silent.