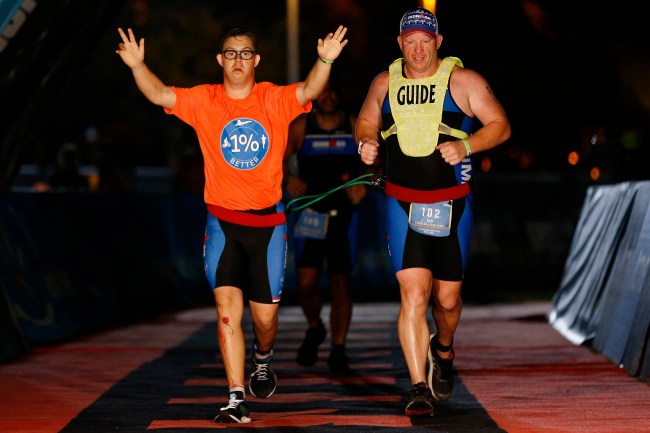 IRONMAN. Goal set and achieved. Time to set a new and BIGGER Goal for 2021. Whatever it is the strategy is the same. 1% Better every day. YES, I did the work but I had angels helping me. God surrounded me with Angels. Best part of all. New family and friends. All about awareness and inclusion. Awareness for Down Syndrome and Special Olympics. Inclusion for all of us with all of you. I’m sorry for not responding personally to all your messages. It’s amazing but overwhelming because I got 33K new followers and messages since yesterday. I will try and catch up. If you want to support my mission for Down Syndrome and Special Olympics go to my website www.ChrisNikic.com because 100% of the donations go to my charities. I achieved my goal and now I want to help others like me. Thank you to @ironmantri and @im_foundation for making it possible. Thank you @specialolympics @specialolympicsfl for starting the triathlon program. Thank you @rodsracing for giving a home to babies like me. I will be thanking so many more people over the coming days. But I must start with the 3 Angels who trained with me and did the race with me. Dan, Jenn and Carlos. #inclusion

Never in Ironman’s 42-year history has an athlete with Down’s syndrome even attempted an event, let alone completed one. His journey started three years ago when his father noticed that he was becoming less active. Nik Nikic challenged his son to become 1 percent more fit with each day.

The training began with a single push-up and ended with his incredible feat over the weekend. His triathlon attempt began at 7:25 a.m. EST in Panama City Beach, Fla. with the swim portion of the event. Nikic was assisted by guides throughout the day.

He completed the 2.4-mile swim in one hour and 55 minutes and hopped on his bike for the longest section of the day. 112 miles later, Nikic finished the ride in just over eight hours, setting him up to run a marathon in about 6.5 hours. He suffered a minor bike crash early on in the day but didn’t let his fall or the scrapes on his knees break his spirit.

Ladies and gentleman, @chrisnikic is off the bike! A 26.2 mile run remains. He has roughly 6.5 hours to get it done and make history! 💪 #IMFL #inclusion #onepercentbetter pic.twitter.com/Np7uGmqwdD

As he geared up for the final push, the most heartstring-tugging moment of the day came while his father laced up his running shoes. The proud dad’s voice breaks with pride as he says “you are almost an Ironman buddy. You’re two thirds of an Ironman.”

After some ant bites while stopping for nutrition and cuts from a little spill, nothing is stopping @ChrisNikic.

Who wouldn’t be inspired by this young man or the words of his father Nik as he gets ready for the marathon!#onepercentbetter #anythingispossible pic.twitter.com/Q9vt6x82hF

He started slow on the run and paced just over 16 minutes per mile, but picked up the pace on the final stretch and split his last few miles around 14 minutes. His final kick helped him cross the finish line before his 10:52 p.m. cutoff time, making history.

After accomplishing his first goal, Nikic has his eyes set on competing in the 2022 Special Olympics, which will take place in Florida,