Chris Paul Blasts Referee Scott Foster After Game 7 Loss, Claims Foster ‘Made A Point’ To Tell Him He Reffed His Game 7 Loss In 2008 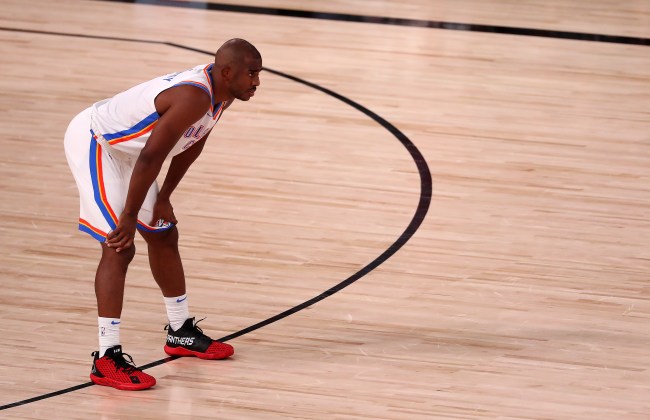 Chris Paul’s bitter feud with referee Scott Foster was rekindled during the Thunder’s heartbreaking 104-102 game 7 loss against the Rockets on Wednesday night.

Last year, a frustrated Paul said he met with the league because he believes the veteran NBA referee has a personal vendetta against him.

After game 7 of the Rockets-Thunder game, an angry Paul once again blasted Foster for giving him a bogus delay of game call.

According to Paul, he got called for delay of game because he was stalling by tying his shoe while waiting to see if the arena would show a replay to help the team determine if they should challenge a play. Paul says Foster noticed him stalling and told him not to bother tying his shoe because they were going to sweep the floor. Foster still went on to call the delay of game violation on Paul which annoyed the Thunder point guard.

Chris Paul on the delay of game he got for tying his shoe, gave his old friend Scott Foster a shoutout: pic.twitter.com/udwtsjI1lN

I asked Chris Paul about the officiating – specifically that delay of game call. He named Scott Foster as says he knows he’ll get fined.

A passionate response that includes “that shit don’t make no sense…we could have won the game” pic.twitter.com/w2MpKr3Uyr

Here’s the video of the delay of game call.

Chris Paul was tying his shoe for a verrrrry long time waiting to see a replay.

Gets a delay of game even though the crew was still mopping the floor. pic.twitter.com/USPCHtskzq

Paul went on to claim that Foster “made a point” to tell him that he reffed his game 7 loss to the Spurs back in 2008 before tipoff of the Rockets-Thunder game for whatever reason.

Foster is universally disliked by players across the league, but it doesn’t seem to matter to the league because he continues to work high-profile games.