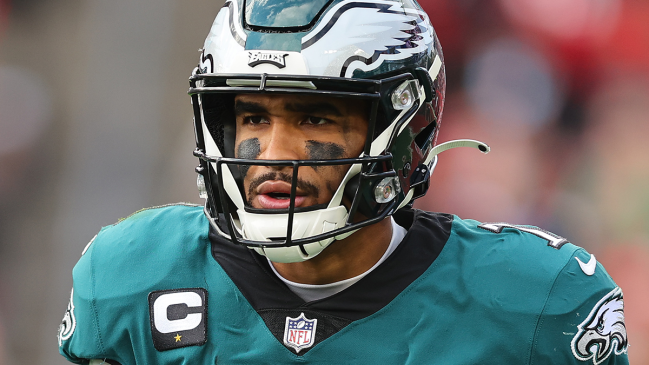 There were a number of quarterbacks who appeared to have the potential to have a breakout season heading into the current NFL campaign. That didn’t turn out to be the case for underachievers like Zach Wilson and Justin Fields, but it’s safe to say Eagles fans have been very thrilled with the glow-up of Jalen Hurts.

The Alabama product showed plenty of flashes of brilliance in his first two seasons in Philadelphia, but he decidedly earned the “Franchise QB” label thanks to how he’s fared this year. Hurts has been an invaluable asset for an Eagles team that currently sports a league-best 12-1 record, as he’s racked up over 3,100 passing yards, gained another 686 on the ground, and thrown 22 TDs while tossing just three interceptions.

That impressive play led to Hurts usurping Patrick Mahomes as the favorite to take home MVP honors earlier this week. There’s no telling how things will ultimately unfold with a few weeks remaining in the regular season, but it’s hard to argue the Eagles QB hasn’t earned the -165 odds he’s now boasting.

However, it appears Chris Simms would disagree with that assessment. On Friday, the QB-turned-commentator issued a Very Hot Take while discussing the MVP race, as he downplayed what Hurts has managed to achieve while being one of Those Guys who prides himself on getting way too pedantic when it comes to defining “Most Valuable Player.”

Chris Simms on Hurts: “There’s just no way he’s more valuable than Mahomes, Allen, or Burrow, no way. If Minshew is in, the Eagles are still damn good. I’m sorry.” 😳 pic.twitter.com/2T6EGwgmO5

Here’s the crux of his argument (which he deployed while endorsing Micah Parsons’ comments from earlier this week):

“Hurts will not be my MVP vote for sure. [Parsons] explained it right. It’s an incredible system that that coach has never even ran before but they had to run it because they couldn’t run their system with Jalen Hurts.

This is one of those where I feel like it’s setting up where the quarterback of the best team’s going to win MVP. There’s just no way he’s more valuable to his team than Mahomes, Burrow, or Allen. No way.

Those are not the same teams if they don’t have them at quarterback, where I’d go if you put Gardner Minshew on the Eagles, they’d still be really damn good.”