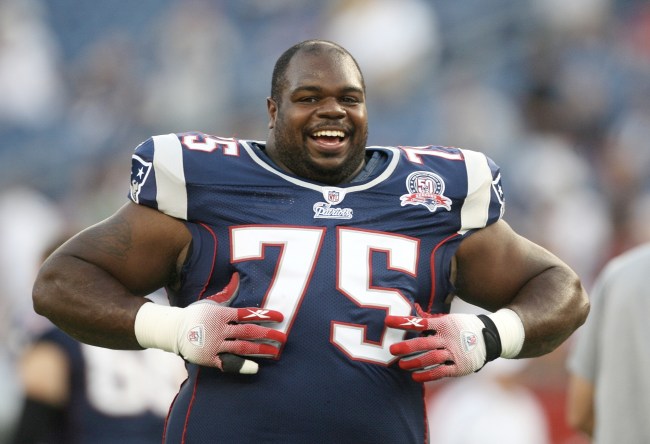 Quick hypothetical here: Would you rather spend one minute in the ring with Mike Tyson or one drive as the quarterback on the opposite end of Vince Wilfork? Both scenarios are a death sentence, it just depends on how you’d prefer to go.

Former Tampa Bay Buccaneers quarterback Chris Simms had a near-death experience with Wilfork and the Patriots back in 2005, a game when Simms was sacked seven times. Of the seven, one sack stuck with him for weeks, literally.

Simms recalled the story to Pro Football Talk’s Mike Florio and I couldn’t help but cradle my family jewels as an involuntary reflex.

A hit by @wilfork75 to @CSimmsQB might have just made @ProfootballTalk a #Lakers fan. Warning to all men everywhere, this sounded like it hurt. 😳 #SNF #GBvsNE pic.twitter.com/zO4LZYt71v

Usually you don’t get sore until the next day. I was already sore, and Vince Wilfork hit me in my pelvic bone one time, and I got a black-and-blue above my genital private area. My genitals were purple and yellow for like two weeks. Can you imagine that? Taking off your pants and going ‘it’s the LA Lakers down there.’”

Mind you, Chris Simms is the same dude who had his spleen removed in an emergency procedure after rupturing it in a loss to Carolina the year following his meeting with Vince. Simms played until 2010 before calling it quits. Probably for the better.