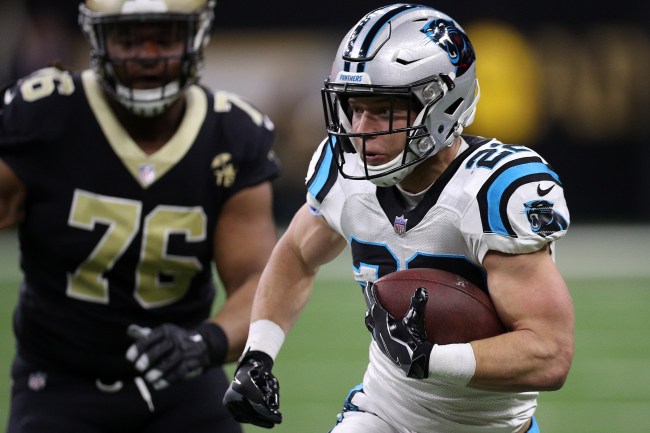 Christian McCaffrey has had a busy offseason so far. Not only did the Carolina Panthers Pro Bowl running back get some attention for liking some of model Olivia Culpo’s pics on Instagram — which is, apparently, a no-no given her previous relationship with Danny Amendola — but he also grabbed headlines for looking like the world’s strongest man when the team’s Twitter account posted a pic of him looking jacked up a couple weeks ago. The pic went viral because, well, how in the f*ck did McCaffrey get so damn swole? Take a look at the pic below.

2️⃣2️⃣ coming for it all 😤 pic.twitter.com/WQRIttO1qQ

Considering the attention that pic of Christian McCaffrey got online, plenty of people want to know his workout secrets. In an interview with ESPN’s David Newton, we now have a better idea, with the running back detailing his daily routine that a few of us regular Joe’s might want to try out for ourselves; assuming we’ve got the balls to do it. Take a look at how hard McCaffrey and his trainer, Brian Kula, are working this offseason to get the NFL player in the best shape of his life.

Christian McCaffrey’s routine goes from Monday through Friday, with three intensive training days a week. The training days start with performance therapy to check for any imbalances, which is then followed by a dynamic warmup and activation routine of linear and lateral development. After that, McCaffrey hits the weight room, receiving a massage, chiropractic work and sometimes sessions in the pool or sauna to help him recover.

Sounds just a little intense, but it’s definitely worked for him given the amount of bulging muscles the guy has put on display recently. And, obviously, there’s a good reason for Christian McCaffrey putting in all the hard work.

“Somebody has eyes on me all the time,” McCaffrey told ESPN. “My training is very specific to my sport, so it’s a lot of fast, explosive movements. It’s very pertinent to exactly what I do on the football field, which is fast burst in short spaces. Every once in a while, I’ll get in the top end.”

“To me, speed kills,” McCaffrey told ESPN.com. “And the league is changing now, especially at the running back position, to where the faster you are, the more dynamic you are, not only with the ball in your hands, but running routes and being able to break tackles. That all has to do with speed.”

In the ESPN story, Christian McCaffrey added that he currently weighs 211 pounds — which is only six more pounds than he was at the NFL Combine a couple years ago — although, clearly, he’s leaner than he was back then. Hoping to withstand another season in which he touches the ball 300-plus times again, he had 326 touches and rarely came off the field in 2018, McCaffrey seems like he’s ready to take over the league as he enters his third season.