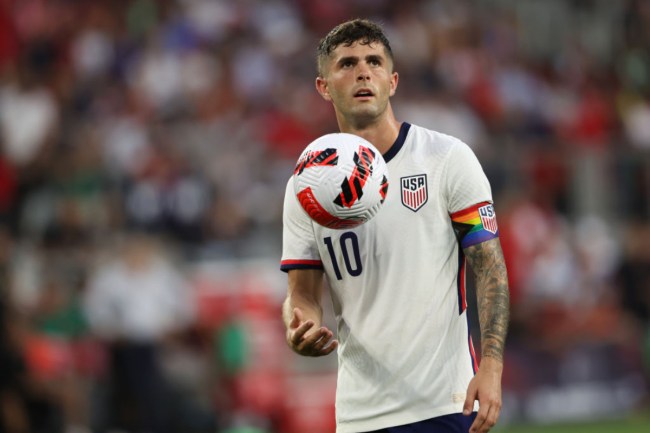 Christian Pulisic is the face of American soccer and very well could be the most beloved USMNT member of all time, which is saying a lot for a guy that’s still only 23-years-old.

You’d be hard-pressed to find a single American soccer fan to say a negative thing about Pulisic.

That is, before his comments about the fans following the USMNT friendly against Morocco on Wednesday night in Cincinnati.

After helping lead the USMNT to a 3-0 win, Pulisic was asked how it felt to be back playing in front of U.S. fans. Instead of giving the generic ‘it felt great’ response, Pulisic took the opportunity to call out the fans, or lack thereof.

“To be honest, for whatever reason I’m not super happy with the amount of Americans here,” Pulisic explained. “Thanks to the ones who did come, and the support is always great from them.”

Christian Pulisic called out the lack of USMNT home fan support after their match against Morocco. pic.twitter.com/kyxBMDw20l

On the one hand, you have to respect Pulisic for being honest about the lack of fans in attendance on Wednesday night. He wants more Americans in the stands, and if there’s one player that can move that needle, it’s Pulisic.

On the other hand, we’re talking about a friendly against Morocco, the 24th ranked team in the world, on a Wednesday night. With the USMNT already in the World Cup and with fans already looking forward to that, it’s a bit tougher for supporters to get fired up, and fork over hundreds of dollars, for a mid-week friendly.

Christian Pulisic Gets Called Out After Criticising American Soccer Fans

I blame the USSF more than USMNT fans. Stop charging $200+ for nose bleeds in a city where the median income is $27,000 and hosts multiple games a year. I get that Ohio is a passionate soccer state, but spread the love to bigger cities https://t.co/9CGiT5ArST

1.) I live in Louisville, didn’t know there was a game
2.) I (like many others) work on Wednesday
3.) ticket prices should be low if you’re struggling to sell out, not high.
4.) Christian is not wrong, but US Soccer does nothing to make it easy for people to attend https://t.co/Xl6dFghxKb

Sorry Pulisic, let me pull out $150 for nosebleeds again. Nowhere else in the world will you find tickets SO expensive for international friendlies. It is expensive to watch soccer live in the US. https://t.co/qsvaRhdTXc

This man is mad that with the cost of everything continuing to rise, there weren't more people willing to fork over significant chunks of cash to see an exhibition game in person involving a team that played here 7 months ago. https://t.co/pbWVwmyQik

Yeah man, a shame more people didn’t start saving in 2002 so they could afford one ticket to a USMNT friendly. https://t.co/flLHztxAhv