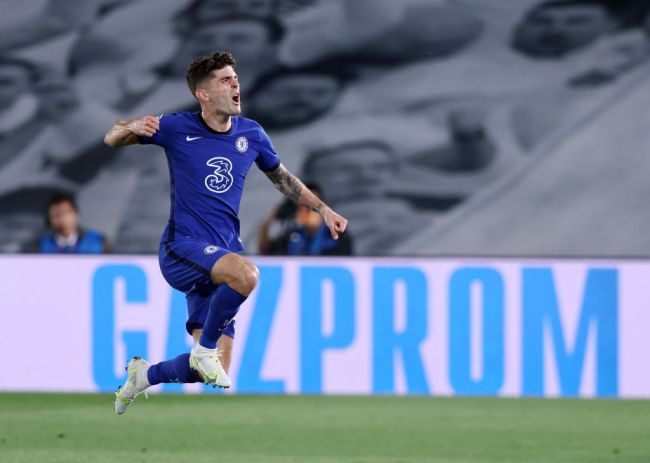 Christian Pulisic made history with a tremendous goal for Chelsea in the first leg of the Champions League semi-final against Real Madrid on Tuesday. The 22-year-old American superstar made a perfectly-timed run that caught out the Real back line in the 14th minute and Antonio Rudiger found him just in front of the box. After having his angle to the goal cut off by the defense, Pulisic calmly reset his touch and rounded former Chelsea keeper Thibaut Courtois and scored between two defenders. His patient, well-executed finish made him the first-ever American player to score in a UEFA Champions League semi-final.

IT HAD TO BE HIM. CHRISTIAN PULISIC 🇺🇸 pic.twitter.com/yfXK3v9H6E

Pulisic had been met with some criticism earlier in the year but he has found his stride and caught fire. Tuesday’s goal marked his fourth in his last six starts across all competitions. IS THAT ANY GOOD?!

RB Leipzig reached the quarterfinal of the Champions League in 2020 and Tyler Adams became the first U.S. international to score in that round, but Pulisic took it one step further and joined Adams, DaMarcus Beasley and Jermaine Jones as the only Americans to score in the knockout stages. It was his fifth all-time goal in the UCL, which also set him alone as the top scoring American in the competition. In addition to making history on the U.S. level, Pulisic became the youngest Chelsea player to score in a semifinal match in the Champions League at 22 years and 221 days of age.

While his goal was impressive, his entire first half performance was even more so. He appeared to be all over the pitch and the numbers backed that up. In the first 45 minutes of play, this was Pulisic’s impact:

Christian Pulisic's first half by numbers vs. Real Madrid:

Running rings around them. #UCL pic.twitter.com/8wHgLsUUBK

If that wasn’t enough, he also completed 94% of his passes, completed 100% of his passes in the attacking third, created three chances (the same number as the entire Real Madrid team) and was successful in 64% of his duels. It was a fantastic performance for the future of United States soccer but Pulisic was eventually subbed off in the 66th minute in favor of some fresh legs. Nevertheless, his performance was by far the most valuable through that amount of time and he is such a special talent when in full form.