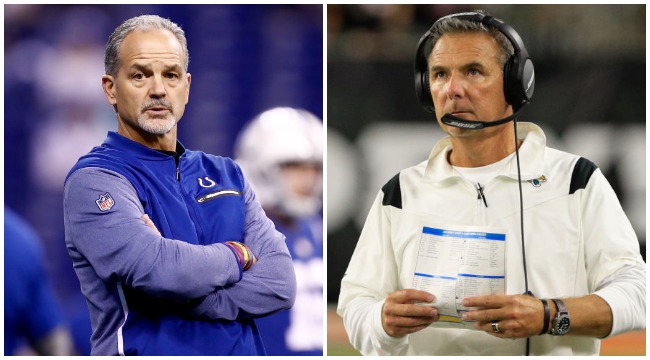 Urban Meyer is down bad.

It’s one thing for trolls on the internet to pile it on, but when you have respected voices within the league coming out and shoveling more dung on your doorstep, that problem extends far beyond a winless season.

Earlier today, longtime NFL executive Mike Lombardi told Pat McAfee that in his 35 years with the 49ers, Browns, Eagles, Raiders and Patriots, he has “never ever been on a team plane where the head coach wasn’t coming back with me.”

Meyer, of course, neglected to ride the team plane back with the Jaguars following a 24-21 loss to the Cincinnati Bengals on Thursday Night Football.

“I thought at the time it was a chance for everybody to clear their head, including myself,” he said in the aftermath.

Chuck Pagano, who spent two decades coaching in various capacities within the NFL, did not mince words about the Urban Meyer nightmare when speaking his former player.

What are your thoughts on Urban Meyer not heading back with his team??

"I've never heard of that in my entire 37 years of coaching.. you don't get to check out it's only the 4th game of the season" ~Chuck Pagano#PatMcAfeeShowLIVE pic.twitter.com/6HEZiX1Woo

“I was blown away.

First of all when that video came out I thought, ‘Ok, someone had to photoshop this guy into this deal.

And right after the game you didn’t fly back with the team? I’ve never heard of that in my entire life, 37 years of coaching. I never once thought about doing that. Win or lose, whatever the circumstances…you don’t get to do that! You signed the contract as the head frickin’ football coach of the Jacksonville Jaguars.”

Pagano followed up by classifying Urban Meyer as a “great coach,” but re-emphasized that in the Big Leagues,  you don’t get to “check out.”

“It’s only the fourth game of the season! Where is he going after 8 games, 9 games? You just don’t get to do that. You’re the face of the franchise. Remember what we’d always say, ‘Protect the name of the back of the jersey and the decal on the side of your helmet.'”

If Urban Meyer leads the Jaguars to the playoffs, this will be the greatest comeback story since the Red Sox overcame a 0-3 deficit to break the Curse of the Bambino.