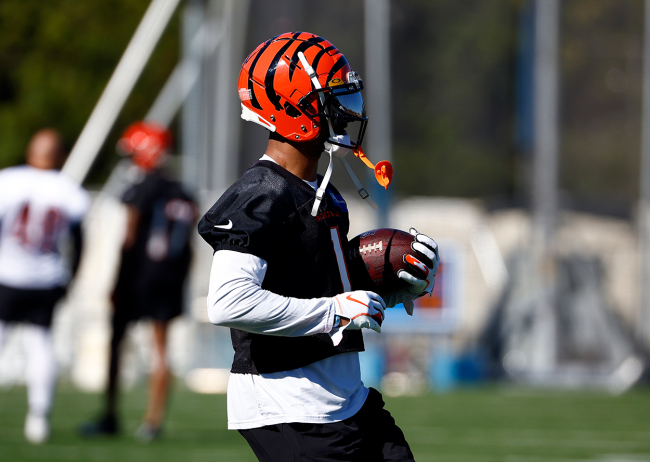 Practice makes perfect, but when it comes to wins, there is also the element of superstition.

Ja’Marr Chase is making sure that his teammates are not forgetting that important component. The Bengals are practicing at UCLA’s football facility in Westwood this week and Chase is keeping his guys in line.

Shea Pitts, a linebacker for the Bruins, filmed a group of Cincinnati players walking out of practice. As they approached a group of poles, a few of the players initially split up to walk through. Chase was having none of it.

The rookie wide receiver quickly put a stop to the players who went out on their own, including safety Ricardo Allen, and wrangled them back in. There is no way that the team was going to split poles on Chase’s watch. That would be bad luck and he was not risking a Super Bowl loss on a pole split.

Supertition or not Ja’Marr would not let them split the pole ! 😂😂😂 #Bengals #Superbowl #Joeburrow #fyp

♬ Jump Around – House Of Pain

Chase addressed the viral moment on Twitter and said that he had to make sure his team was walking right.

walk right when you walking with me 😭 https://t.co/lG6oQhgCMW

Should the Bengals win on Sunday, remember this moment. They chose not to split the pole and avoided what could have been a terrible loss by superstition.