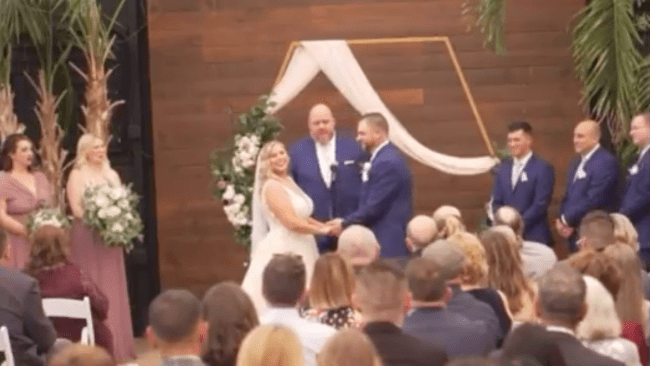 Your wedding day is supposed to be one of the best days of your life, but for Kevin McCarthy, it couldn’t have been better. Not just because he said “I do” but also because his alma mater won the most important game in the school’s history.

McCarthy, you see, is a Cincinnati fan. He went to the university and serves as the Director of Retail Operations for Dining Services.

Thus, he had a great investment in the No. 7-ranked Bearcats’s game against the No. 9-ranked Notre Dame Fighting Irish on Saturday in South Bend.

The winner had a legitimate shot to run the table and potentially earn a spot to play in the College Football Playoff, while the loser would have its hopes dashed. UC has never reached a playoff, never played in a national championship game and never finished a season in the AP Poll top-five.

Meanwhile, as the Bearcats kicked off from Notre Dame Stadium, McCarthy had to prepare to walk down the aisle and leave with a wife. It is hard to imagine that he didn’t have the game on during the pre-ceremony festivities, but he certainly did not as he stood in front of his closest friends and family.

The wedding began during the second half, and right before McCarthy and his fiancé Jessica became husband and wife, Cincinnati held a lead. Wedding officiant and friend of the couple, Adam Billiter, wanted to update Kevin and those in attendance on the score.

His execution was brilliant.

Billiter pretended to be reading from the bible, something he promised not to do.

He referenced the book of Luke— as in, Bearcats head coach Luke Fickell. The verse he chose was 24:13— as in the score. He then let everybody know that there was four minutes left.

When your friends are getting married during the biggest @GoBearcatsFB game you have to keep alum @mccartk2 and the people updated. Congratulations to Kevin and Jessica McCarthy and all the Bearcats out there on a huge weekend. pic.twitter.com/ErGlZCdnaQ

Jessica’s face is clearly nervous when Billiter first references the religion element, but she quickly seems to catch on. In fact, after he read the score, someone in the crowd shouted “CATS!” and it clicked.

The whole thing was amazing. College football is our religion.